Edward Synge, a famous clergyman and preacher, was vicar of Christchurch in the late 17th and early 18th century. He was born in 1659 in Innishannon, Co. Cork, the parish where his father was at the time vicar. The family originated in Bridgnorth in Shropshire, where the name appears originally to have beenMillington. According to tradition, they acquired the name of Sing or Synge from the sweetness of voice of one of the family. 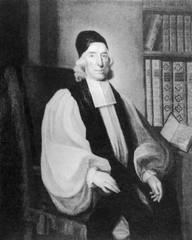 Synge was educated at Christ Church, Oxford and Trinity College, Dublin. After a number of years in charge of the two small parishes of Laracor and Augher in the diocese of Meath, Synge was appointed to the vicarage of Christchurch. He remained there for more than twenty years. In 1705 he was appointed chancellor of St. Patrick’s Cathedral in Dublin and during the next eight years he established a reputation for himself as one of the most industrious clergymen and popular preachers in the city.

In 1714 he was consecrated bishop of Raphoe in the church of Dunboyne, Co. Meath, by the archbishop of Cashel, and in 1716 was translated to the archbishopric of Tuam, Co.Galway. He died at Tuam in 1741, and was buried in the churchyard of the cathedral.

Amongst other achievements Edward Synge established a dynasty of prominent ecclesiastics and literary figures closely integrated into the Protestant squirearchy in the west of Ireland. Interestingly, Synge is a distant relative of the famous Irish playwright John Millington Synge, author of The Playboy of the Western World.