This monumental stone which is traditionally known as the ‘Modest Man’ is the tombstone of twice elected (1537 and 1549) Mayor of Cork Thomas Ronan (died 1554) and his wife Johanna Tyrry (died 1569). Both were members of prominent medieval families in the city. 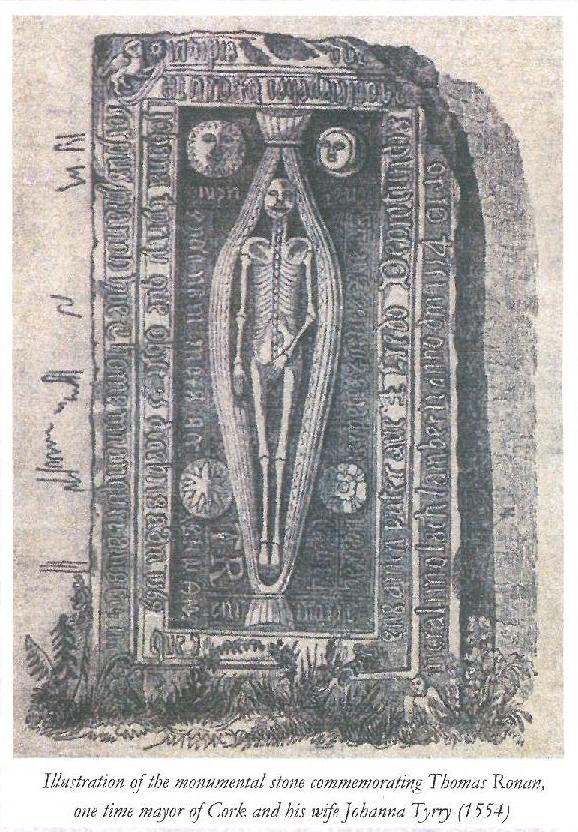 Illustration of the Modest Man from the Dublin Penny Journal

The monumental stone is supposed to have formed part of the floor of the old church before its demolition in 1716 and the rebuilding in the 1720’s. The slab was subsequently discovered in 1815 buried at a considerable depth beneath the floor of the crypt and was then in a state of high preservation. It has been moved several times since and was recorded in 1877 as being laid up against the north wall of the cemetery, opposite the cemetery gates on Christchurch Lane.

When first discovered in the ground, the letter of the inscription was inlaid with a bright red substance something of the nature of sealing-wax. The sculptor obviously knew little of the human frame, as is evident from the lower joints of the arms and the legs (missing bones), and his having cut 14 ribs at one side and 12 at the other.

The limestone sculpture depicts a skeleton in a shroud, tied at the top and bottom with the centre revealing a skeleton within. Depictions of skeletons in burial monuments were quite common all over Europe from the late 14th – 17th century and were used to remind people of death (memento mori) and the fragility of life. The prospect of death also served to emphasize the emptiness and fleetingness of earthly pleasures, luxuries, and achievements, and was thus an invitation to focus on the prospect of the afterlife.

Symbolic figures on each corner of the stone are representations of the Four Evangelists. Although the figure on the top right hand corner has been destroyed we can safely assume that it was the figure of an eagle, representing John. The remaining figures feature a winged lion (Mark), an angel (Matthew) and a winged bull (Luke).

The slab also contains carvings of the Sun, Moon, a Star, a Rose and the letters T.R.

These carvings have possible symbolic meanings: 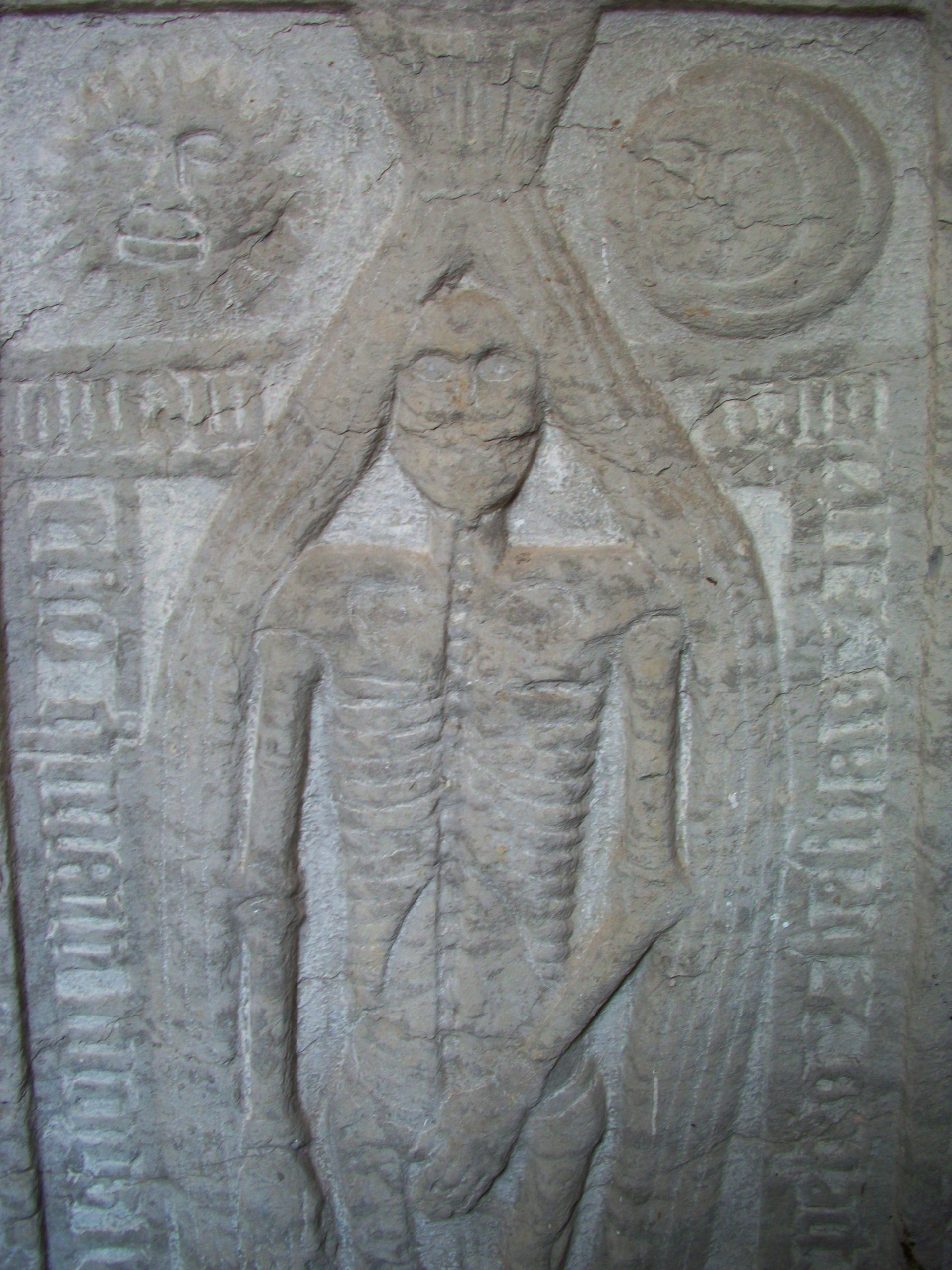 The remaining space is occupied by 3 Latin inscriptions in gothic script, one within the other, each extending the four sides of the stone. The translated inscription reads:

‘In this tomb is covered the body of the gracious gentleman Thomas Ronan, formerly Mayor of Cork, who died on the day after St Jambert’s Day [13 August], 1554.’

‘With who there also wishes to be buried his wife Joan Tyrry, who died on the 1st December in the year of our Lord 1569: on whose souls may God have mercy. Amen. Pater, Ave and Credo. De Profundis.’

The graphic depiction of the cadaver is accompanied by the following text:

‘Man, be mindful, since Death does not tarry; for when he dies, you will inherit serpents and beasts and worms.’

The text is apt as the figure of death was believed to communicate with a hidden world that comes from the depths of the earth and from the interior of the body inhabited by worms, toads, snakes and monsters.