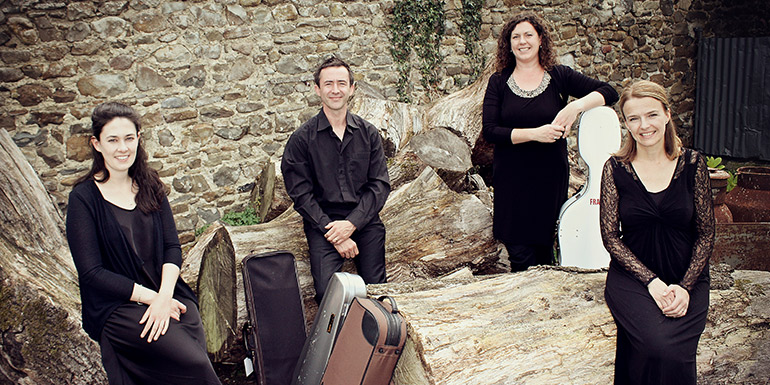 The Banbha Quartet was founded in 2020 and took part in the National String Quartet Foundation’s Beethoven 250 series.

The concert will go live at 8pm on Triskel’s Digital Stage on Friday 9 April and will be available for ticketholders to watch until 8pm on Sunday 11 April.

Lidia Jewłoszewicz-Clarke began playing the violin at the age of seven at the National Music School in Koszalin, Poland. Lidia has distinguished herself in many national and international competitions and prizes, both as a soloist and a chamber musician. She has also been awarded a number of scholarships and awards, including the scholarship of the President of the University of Music in Luzern, Switzerland in 2003 and an Artistic Scholarship of the President of Gdańsk for Special Achievements in Music and Culture in 2004. In the same year, Lidia was awarded the Gdańsk Mozart Prize, which led to several performances as a soloist in Mozart’s Violin Concerto in G major. After moving to Ireland, she won the 2013 Hibernian Orchestra Concerto Competition, which led to her first performance as a soloist in Ireland with Prokofiev Violin Concerto No. 2. She regularly works with Irish orchestras and groups, including the RTÉCO, RTÉNSO, Barry Douglas’ Camerata Ireland, the Ulster Orchestra, Wexford Festival Opera Orchestra, Musici Ireland and Crash Ensemble. As a soloist and member of various groups, she has toured Asia and most European countries, performing at the NCPA Beijing, NCPA Mumbai, Concertgebouw Amsterdam, Royal Opera House of Versailles, Royal Albert Hall, Royal Festival Hall, St Martin-in-the-Fields, St John’s Smith Square and many others. Lidia has a keen interest in contemporary music and led the Irish premiere of Dubliners by Andrew Synnott in 2017.

In 2005, she graduated with distinction from the Stanisław Moniuszko Academy of Music in Gdańsk in the class of Prof. Pawlak. She then moved to London, where she furthered her education at the Royal Academy of Music, where she studied under Prof. Remus Azoitei and graduated with an MA in Performance and an LRAM Diploma in Teaching. She has participated in masterclasses with Tasmin Little, Sebastian Hamann, Aleksandar Pavlovic, Konstantin Weitz, Edward Zienkowski, Tomotada Soh, Wanda Wilkomirska, Krzysztof Wegrzyn, Jadwiga Kaliszewska and Bartosz Bryla.

Award-winning Irish violinist Maria Ryan is currently based in Kilkenny after nearly a decade spent in London. Maria moved to London in 2010, to lead the Southbank Sinfonia for their 2010 season and she has continued working as a soloist, chamber and orchestral musician since. She worked extensively with orchestras in the UK, including the BBC Symphony and Concert Orchestras, the English Chamber Orchestra, the Royal Philharmonic Orchestra, and the Philharmonia, to name a few. She also continues to work with the orchestras in Ireland including the RTÉ Orchestras and the orchestra of Irish National Opera.

A keen chamber musician, Maria has performed in many chamber groups including the Irish Chamber Orchestra, Camerata Ireland, the Amarillo Trio, and in duo partnership with Úna Hunt and Ciara Moroney. She looks forward to performing with Gabriela Mayer in 2020. Maria recently joined the lecturing staff at the CIT Cork School of Music.

Robin Panter is from Liverpool and studied the viola at the Royal Northern College of Music with Roger Benedict and Scott Dickinson. In 2004, Robin joined the viola section of the BBC Scottish Symphony Orchestra, and while in Glasgow teamed up with a group of musicians to set up a Scottish version of El Sistema, visiting Venezuela and applying its ground-breaking social and community development programme to schools in Raploch, Stirling.

Robin now lives in Ireland where he is a member of the Irish Chamber Orchestra and regularly performs with the RTÉ and Ulster Orchestras, amongst others. Robin is also a keen chamber musician and is a member of the Robinson Panoramic Quartet (violin, viola, cello and bass), who have commissioned around 25 new works, many from Irish composers and four of which were performed as part of a residency at Kaleidoscope Night in 2014.

Robin plays a John Dilworth viola and a Noel Burke bow, both of which were part-funded and supported by Music Network’s Music Capital Scheme, funded by The Department of Arts, Heritage and the Gaeltacht. Music Network is funded by The Arts Council.

Selected by the Arts Council as a Next Generation Artist 2020, Aoife Burke’s numerous national prizes and awards include the Senior Cello Award, Bach Prize, Clyde Twelvetrees Cup, RTÉ Lyric FM Award and Hazel de Courcy Lewis Cup at Feis Ceoil, Dublin, and the Capuchin Order Perpetual Cup and Bursary at Feis Maitiú, Cork. Aoife studied with Emma Ferrand at the Royal Northern College of Music and with Christoph Richter at the Folkwang Universität der Künste, graduating with a first-class BMus. (Hons.) and an LRSM Diploma in Performance with Distinction in 2014. During her studies, Aoife was awarded the Raphael Sommer Music Scholarship and partook in the Britten-Pears Young Artist Programme. She was subsequently awarded a first-class MA in Performance from the CIT Cork School of Music, where she studied under Christopher Marwood.

Aoife performs regularly at venues and festivals in Ireland and further afield, including at the West Cork Chamber Music Festival, New Music Dublin, the NCH Chamber Music Gathering, the NCH Perspectives Series and the Clandeboye Festival, where she was awarded the Special Festival Prize. She has collaborated with The Vanbrugh, the ConTempo String Quartet and the Gavin Bryars, Kirkos, Ficino and Crash Ensembles. She currently holds a residency at the Triskel Arts Centre, where she curates the Spotlight Chamber Music Series. Aoife gratefully acknowledges the generous support of Music Network’s Music Capital Scheme, funded by The Department of Culture, Heritage and the Gaeltacht. Music Network is funded by The Arts Council.