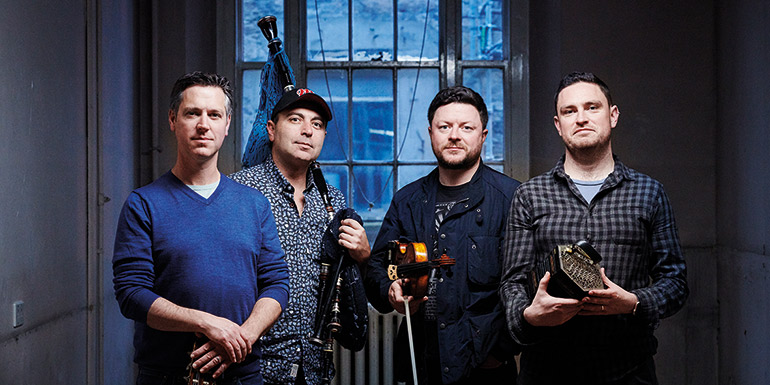 Anxo Lorenzo, Jim Murray, Dónal O’Connor and Jack Talty will be here on Wednesday 22 January at 8pm and these are the reasons you HAVE to see them:

1.       A debut tour from a brand new quartet
Get ready to hear a powerhouse quartet of highly creative Galician and Irish musicians, performing together for the first time on this tour. As individual players, composers, arrangers, accompanists, producers and record label owners, Anxo, Jim, Dónal and Jack have initiated hundreds of thoughtful and innovative projects to date and have made a massive contribution to music in both local and international arenas. Thrilling, soulful, sincere and highly communicative, collectively, theirs is a music of people and place, of stillness, of confluence and of us.

2.       Get into the Galician gaita
Known for his exceedingly high octane performances, Anxo Lorenzo is an award-winning Galician piper (Galician pipes are called “gaita”) who loves to combine is own traditions with jazz, electronic, pop, rock, flamenco and more. Geoff Wallis at the Irish Music Review has written that his performances display “sheer speed and unbridled imagination that simply defies belief!”

3.       Irish badgers are Spanish
According to recent genetic studies from Trinity College Dublin, for us in Ireland our strongest human relatedness is with the Northern Iberian peninsula. The same study produced the heart-warming confirmation that Irish badgers are Spanish, but British badgers are not, and this may go a little way towards understanding why we have such warm affinity and friendship with Galicia, its music, culture, and folklore.

4.      There’ll be brand new music you won’t hear anywhere else
The tour includes a brand new collective composition, commissioned by Music Network. Reflecting each musicians’ personal style and character, the new composition drills deep into the “well of tradition”, while celebrating innovation with a global musical outlook.

5.      It’s an antidote to a Brexit-y state of mind
Music has always broken boundaries, never built them. The four extraordinary musicians on this tour are celebrating differences and seeking connections all in the name of a good tune. In these strange times of aggressive tribalism and ugly exclusion, we need musical friendships more than ever.

Get your tickets now!