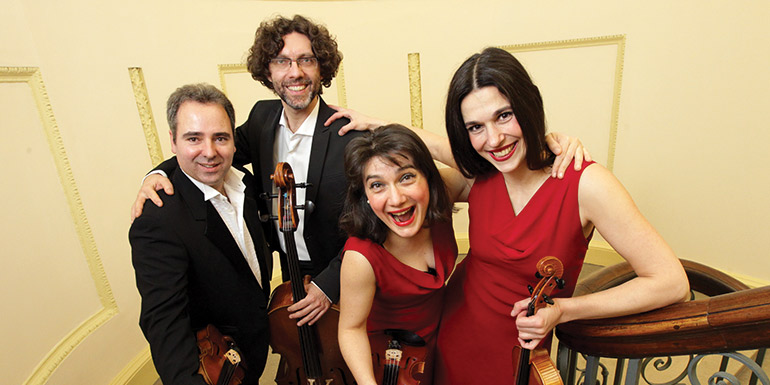 The second concert in the Beethoven Reflected series

The second concert in the series traces threads of connection from the work of Beethoven through to New York’s Julia Wolfe and Cork composer sisters Irene and Linda Buckley. There is a particular focus on his String Quartet No. 14 in C Sharp Minor, Op. 131, written in 1826, the year before Beethoven died. It is said that upon listening to a performance of this quartet, Schubert remarked, “After this, what is left for us to write?” Movements I, VI and VII are featured, serving as departure points for reimagining material in new work composed for the concert by Linda and Irene Buckley. Julia Wolfe has often spoken of the Beethoven influence in her own work, most notably from his late quartets. Four Marys marries the worlds of Appalachian folk music with the elegiac qualities of late Beethoven, reflecting Wolfe’s dissolving of boundaries between genres.

Irene Buckley, a composer from Cork, holds a BMus and a PhD in Composition from University College Cork and an MA in Music Technology from Queens University Belfast. Irene composes for film, theatre and dance productions. In recent years she has focused on composing live scores for silent movies. These include Dreyer’s The Passion of Joan of Arc (1928) for soprano, organ and electronics and Epstein’s The Fall of the House of Usher (1928) for organ and electronics (both were commissioned by the Cork French Film Festival and have since toured in venues such as Glasgow Cathedral for Glasgow Film Festival and Union Chapel, London) and Murnau’s Nosferatu (1922) for viola, cello, organ and electronics and was co-composed by Linda Buckley (commissioned by Union Chapel, London and performed at the 2018 Cork Film Festival and The New Sounds Live Silent Films series, New York).

Linda Buckley is an Irish composer who has written extensively for orchestra, and has a particular interest in merging her classical training with the worlds of post punk, folk and ambient electronica. Her work has been described as “fantastically brutal, reminiscent of the glitch music of acts such as Autechre” (Liam Cagney, Composing the Island) and “engaging with an area of experience that new music is generally shy of, which, simplified and reduced to a single word, I’d call ecstasy” (Bob Gilmore, Journal of Music). Awards include a Fulbright scholarship to NYU and the Frankfurt Visual Music Award 2011. Performances include the BBC Symphony Orchestra, Icebreaker, Iarla O’Lionaird, Joby Burgess, Ensemble Mise-En and Crash Ensemble. She currently lectures in Composition at the Royal Conservatoire of Scotland.

Julia Wolfe draws inspiration from folk, classical, and rock genres, bringing a modern sensibility to each while simultaneously tearing down the walls between them. Wolfe’s music is distinguished by an intense physicality and a relentless power that pushes performers to extremes and demands attention from the audience. She has written a major body of work for strings, from quartets to full orchestra. Her music has been heard at venues throughout the world and has been recorded on the Cantaloupe Music, Teldec, Point/Universal, Sony Classical, and Argo/Decca labels. In addition to receiving the Pulitzer Prize, Wolfe was a 2016 MacArthur Fellow, she received the 2015 Herb Alpert Award in Music, and was named Musical America’s 2019 Composer of the Year. She is on faculty at the NYU Steinhardt School and is co-founder/co-artistic director of New York’s legendary music collective Bang on a Can.

The ConTempo Quartet is the resident quartet of the Galway Music Residency and was RTE’s Resident Quartet from 2014 until 2019. Praised as a “fabulous foursome” (Irish Independent) and noted for performances which are “exceptional” (The Strad) and “full of imaginative daring” (The Irish Times), RTÉ ConTempo Quartet has forged a unique place in Irish musical life. Since its formation in Bucharest in 1995, the quartet has performed more than 1,800 concerts world-wide in 46 countries, including prestigious venues such as Wigmore Hall; Théâtre du Châtelet, Paris; St Martin-in-the-Fields; Berliner Philharmonie; Palazzo del Quirinale, Rome; Carnegie Hall and the Opera House Tel-Aviv. ConTempo have had the honour to meet and play in front of world personalities such as Prince Charles, Nelson Mandela, Pope John Paul II, EU Ministers, Michael D. Higgins, Hollywood stars and Nobel Prize winners. The ensemble has won a record of 14 international prizes (including Munich, Rome, Berlin, Prague and London) and worked alongside artists of the highest calibre including Emma Johnson, Yuko Inoue, Hugh Tinney, Chen Zimbalista, Jérôme Pernoo, Peter Donohue and Martin Roscoe. Collaborations with other distinguished quartets have also been a feature, such as the Amadeus, Arditti, Vanbrugh, Casals and Endellion.