The Third Man | Triskel Arts Centre
We are committed to the Health & Safety of our staff and audiences. And we are operating under the agreed protocols described under "Guidance documents for the Safe Operations of Cinemas during COVID-19 Resilience and Recovery 2020-2021", a copy of which can be found here.
Live Music
Cinema
Visual Art
Festivals
Education
Special Events 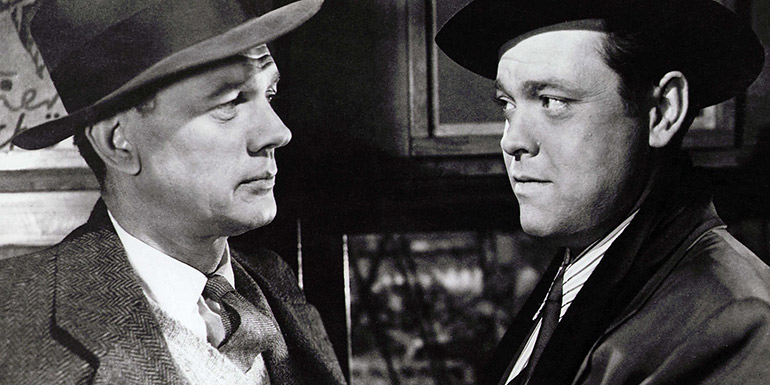 “I never knew the old Vienna before the war with its Strauss music, its glamour and easy charm…”

Holly Martins (Joseph Cotton), a naïve writer of pulp westerns, arrives in Vienna to meet his old friend Harry Lime (Orson Welles) but finds that Lime has apparently been killed in a suspicious accident. Martins, too curious for his own good, hears contradictory stories about the circumstances of Lime’s death and as witnesses disappear he finds himself chased by unknown assailants.

Complicating matters are the sardonic Major Calloway (Trevor Howard), head of the British forces, and Lime’s stage actress mistress, Anna Schmidt (Alida Valli). Will Martins’ curiosity lead him to discover things about his old friend that he’d rather not know?

Brilliantly scripted by Graham Greene and set to Anton Karas’ evocative zither score, this justly celebrated classic is further enhanced by Robert Krasker’s Academy Award winning cinematography and Orson Welles in possibly his most iconic screen role. Triskel Arts Centre is proud to bring The Third Man, now celebrating its 70th anniversary and voted the ‘greatest British film of all time’ by a British Film Institute poll, back to the big screen where it rightly belongs.

Light / Sound (7 minutes, (directed by Vicky Langan, Maximilian Le Cain) chronicles a ghostly, sonic encounter between performer / sound artist Vicky Langan, out hunting for sound with her recording apparatus, and an ancient 35mm projector. Shot in December 2009, this was the first cinematic collaboration between experimental filmmaking duo Langan and Le Cain. This short film will support The Third Man.