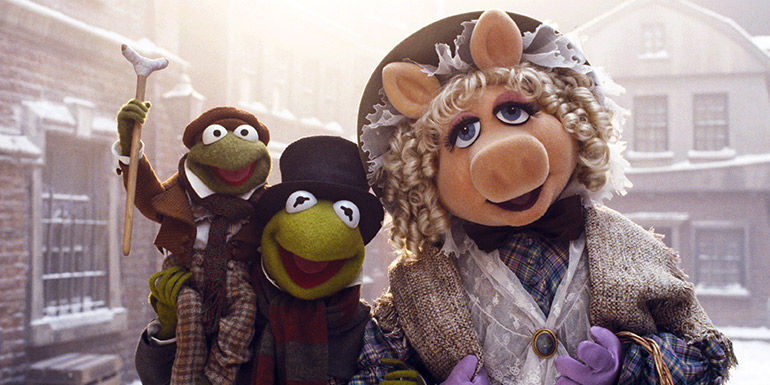 Brian Henson directs his late father’s creations in the Charles Dickens classic, the best known (and most oft-filmed) Christmas story of all time. Michael Caine plays the old miser Scrooge with Kermit as his long-suffering but ever-hopeful employee Bob Cratchit, Miss Piggy as Cratchit’s wife, and a host of Muppets (including the Great Gonzo as an unlikely Charles Dickens) taking other primary roles in this bright, playful adaptation of the sombre tale. Or at least it starts brightly enough–the anarchic humour soon settles into mirthful memories and a sense of melancholy as the ghosts of Christmas past, present, and future take Scrooge on a journey of his lonely, wasted life.

Michael Caine makes a wonderful Scrooge, delightfully rediscovering the meaning of life as fantastic creations from Henson’s Creature Shop (developed specially for this film) take the reins as the three ghosts. While the odd mix of offbeat humour and drama undercuts the power of Dickens’s drama, this kid-friendly retelling makes an excellent family drama that adults and children alike can enjoy.

We are delighted this year to be screening a special extended edition of The Muppet Christmas Carol, with the musical number “When Love Is Gone” added back into the film!

Book Tickets
Plenty of laughs and a host of memorable songs
Total Film
Share this...