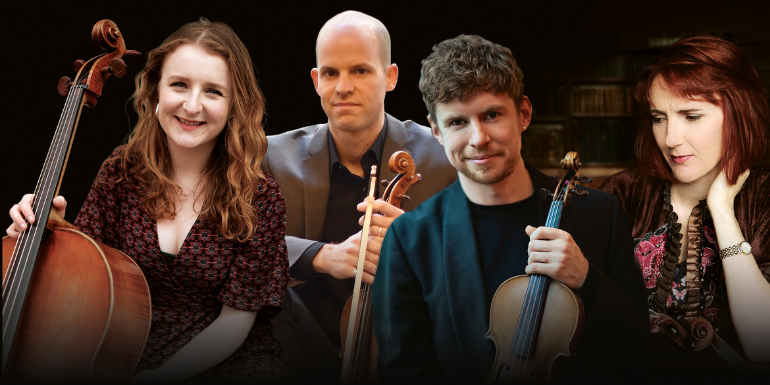 The Ficino Quartet features four of our leading musicians and has toured annually for the Foundation since 2018. Here they present another fascinating programme including Philip Glass’s hugely popular ‘Mishima’, drawn from his 1985 soundtrack to Paul Schrader’s film on the life of author, playwright and latter-day Samurai, Yukio Mishima. The concerts also feature a new commission by Cork composer Linda Buckley, and Ravel’s evergreen string quartet from 1903.

Formed in 2013, the Ficino Ensemble has been committed to exploring the vast chamber music repertoire and presenting thoughtfully programmed concerts. The group regularly perform as a string quartet, and the addition of winds and percussion gives the possibility of playing large-scale chamber works. The members share a dedicated approach to contemporary music and have been invited to play as part of Moving on Music in Belfast, where they performed works by John Buckley, Anselm McDonnell and Ian Wilson. In 2019 they collaborated with several composers of the Irish Composers Collective, where the musicians worked on pieces with the composers and premiered several new works for flute, harp and viola. Ficino Ensemble was recently joined by the Con Tempo String Quartet in a performance of works by Brahms, Mendelssohn and Enescu as part of the Dublin Enescu Festival. In 2018 they performed a concert with Olwen Fouéré as part of MusicTown in Dublin, which included a performance of Thomas Ades’ Four Quarters and Ludwig van Beethoven’s String Quartet Op. 132. Their debut recording Winter, released on the Ergodos record label, has received critical acclaim and has put them at the forefront of the Irish chamber music scene. Ficino Ensemble takes the name from Marsilio Ficino, the Renaissance philosopher who regarded music as a “contemplation of the divine”. ficinoensemble.com

Born in Aberdeen, Elaine Clark studied with David Takeno at the Guildhall School of Music and Drama in London, where she won several awards and prizes. After graduating with a First Class Honors Degree, she continued her studies with Viktor Liberman at the Utrecht Conservatory in the Netherlands.In 1996, she was appointed Co-Leader of the RTÉ National Symphony Orchestra and has performed many concerti, including those of Berg, Brahms (Double Concerto), Bach, Tchaikovsky, and Mozart (Fifth Violin Concerto, as soloist and director) with various orchestras in Scotland and England. Since joining the RTÉ NSO, she has been a regular soloist with the orchestra, most recently in performances of Prokofiev Concerto No. 1, Tippet’s Triple concerto as well as Vivaldi’s Four Seasons and Piazzolla’s Four Seasons of Buenos Aires, for which she was soloist and director.

As a member of the contemporary music group, Concorde, Elaine has specialised in contemporary violin repertoire, giving many Irish and world premieres and working closely with many distinguished composers. Elaine can be heard performing on Concorde’s most recent CD, Reflections, and also What Was, the recently launched CD by Judith Ring. Elaine is very much in demand as a chamber musician and has performed numerous concerts around Ireland with the Clarion Horn Trio. In 2007, she was invited to guest-lead the Melbourne Symphony Orchestra for a series of concerts and since then, has also guest-led the Ulster Orchestra and BBC Scottish Symphony Orchestra.

Hugh is a graduate of MTU Cork School of Music where he studied with Ruxandra Colan-Petcu. He currently lives and works in Dublin as a member of the RTÉ Concert Orchestra. He has also enjoyed appearances with the John Wilson Orchestra at festivals, the BBC Proms, and their UK tour. Recent orchestral work includes Sinfonia of London and Irish National Opera. Hugh has also been heard as the violinist on the UK touring shows Les Misérables and Book of Mormon.

Nathan Sherman is a viola player, conductor and educator who enjoys a versatile career. He was immediately attracted to the darker sonorities of the viola from a young age and chose to explore the instrument and its repertoire further at the Royal Irish Academy of Music, the Royal Academy of Music and the Escuela Superior de Musica Catalunya in Barcelona. Nathan is especially interested in contemporary music, where the viola has its richest and most diverse repertoire. He has premiered works by Kevin O’Connell and Ian Wilson in Ireland and the United States, and has performed and recorded with Evlana, Crash Ensemble and Kirkos. As Artistic Director of Ficino Ensemble, Nathan has performed much of the major chamber music repertoire. After a year investigating the rich musical life in Dublin during the time of Geminiani at Maynooth University, Nathan took historical performance classes with Monica Huggett and now plays with the Irish Baroque Orchestra, Ensemble Marsyas and Camerata Killkenny. His collaboration with Alex Petcu has opened the possibilities of venturing into newly explored sonorities of viola and percussion. Nathan runs a community-based orchestra called the Offbeat Ensemble which meet on a weekly basis and regularly raises money for music education projects for children.

Yseult Cooper Stockdale studied in Cork, Dublin and Leipzig and enjoys a versatile career between the UK and Ireland. She has worked with both RTE orchestras, the Irish Chamber Orchestra, Welsh National Opera, Southbank Sinfonia and Bournemouth Symphony Orchestra. As chamber musician she has played in groups including the Vanbrugh, the Alberi Piano Trio, Musici Ireland, Crash Ensemble, Ficino Ensemble and London-based Scordatura Collective. She has a keen interest in exploring new music, and has performed over 50 premieres with Kirkos Ensemble.

The Autumn String Quartet Series is back with music from four wonderful quartets, with programmes featuring Tom Lane, Shostakovich, Linda Buckley, Ravel and more. This series is part of our longstanding partnership with the National String Quartet Foundation. Funded by the Arts Council and RTÉ Lyric FM.