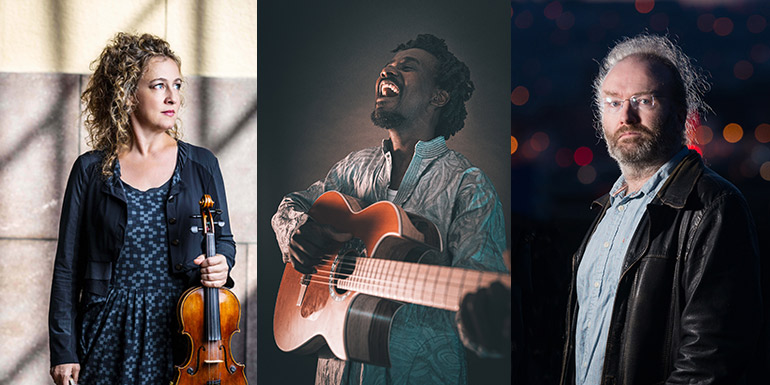 Combining their extensive and varied musical influences, they’ve found common ground and will push the creative boundaries in a unique cross-cultural, cross-genre collaboration. Expect striking melodies, beautiful harmonies, deep rhythmic grooves and all-round joie de vivre in a concert that’s sure to be a balm for the soul as this remarkable trio of musicians take to the stage.

Liz Knowles has established herself as a world-renowned, dynamic performer and recording artist as fiddler with Riverdance, The String Sisters, The Martin Hayes Quartet and her trio Open the Door for Three. She appeared as a soloist on the soundtrack for Michael Collins, on Broadway with The Pirate Queen and New York Pops and was a featured artist for the Ireland 100 Festival at The Kennedy Center, performing with actress Fiona Shaw and the National Symphony Orchestra. Liz has been music director and producer for several stage shows and recording projects, most notably a long-running show that toured Europe, Asia and South America.

Liz’s fascination with music has always been rooted in how one can arrive, land, and leave a note. Her early foundations were in classical music but she began to further explore this fascination through the lens of other genres, and has performed with a wide array of artists including Marcus Roberts, Bang-on-a-Can Orchestra, Bobby McFerrin, Paula Cole, Steve Reich, Eliot Goldenthal, Rachel Barton, Don Henley and Tim O’Brien.

Virtuosic Congolese-born, Ireland-based guitarist Niwel Tsumbu has recorded with artists such as Nigel Kennedy and Steve Cooney and performed with Sinead O’Connor, Buena Vista Social Club and Baaba Maal. In 2021, Niwel’s global reach was cemented with his guitarwork on the Grammy award-winning album They’re Calling Me Home by Rhiannon Giddens and Francesco Turrisi. Regularly appearing on the international stage, he has performed at such prestigious venues as London’s Cadogan Hall and the World Exposition in Shanghai.

Niwel’s style is unique and exhilarating, drawing on influences as diverse as jazz, classical, rock, folk and rumba. Having steadily developed his international profile over the last decade, he has earned praise from All About Jazz for his “exquisite and almost seamless” global fusion. The keystones of his music are his sophisticated sense of rhythm, breath-taking guitar playing and thrilling improvisations. Singing in his native Lingala as well as French and English, he is always compelling in performance.

In 2004, Niwel moved to Ireland and his ten-piece band toured the country performing his Big Bang Symphony. He also began an important long-term collaboration with percussionist Eamonn Cagney, as illustrated on their highly praised 2022 release The Art of the Duo.

Composer and concertina player Niall Vallely has toured throughout the globe and recorded with artists such as Nomos, Buille, Karan Casey, Paddy Keenan, Tim O’Brien and Asturian band Tejedor.

Born in Armagh in 1970, he began learning the concertina at the age of seven, taught by his parents Brian and Eithne Vallely, founders of the Armagh Pipers’ Club. He has been a resident of Cork since 1988 and completed a degree in music at UCC in 1992. Niall recently received a PhD in composition from University College Cork and has been involved in high-profile arrangement projects with Lúnasa, Iarla Ó Lionáird, Donal Lunny, Boston Pops Orchestra and the RTÉ Concert Orchestra.

Niall’s compositions have been recorded on more than 75 albums. Since the early 1990s, he has been composing traditional-style tunes and, in more recent years, he has expanded the scope of his compositions to embrace larger scale forms and instrumentation involving musicians from the worlds of traditional and classical music. He has received commissions from RTÉ lyric fm, BBC, TG4, Cork Opera House, Crash Ensemble, University College Cork and the Vanbrugh Quartet and his works have been broadcast on radio and television in Ireland, USA and throughout Europe.

In November 2018, Niall premiered a major new commission for Dún Laoghaire Rathdown County Council entitled 78 Revolutions. In 2019 he completed two large scale works: the Concerto for Concertina and Orchestra was premiered by the National Symphony Orchestra at The National Concert Hall and Macha, a mix of composed music, environmental sound, and multi-media site-specific performance was premiered at Eamhain Mhacha/Navan Fort.