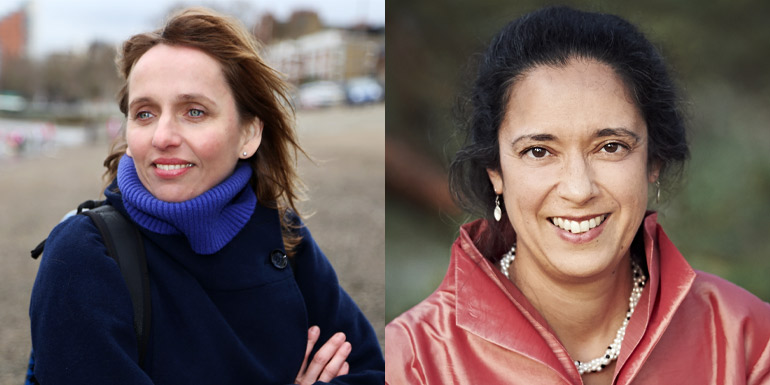 The third concert in the Spotlight Chamber Music Series 2022 sees duo partners Katherine Hunka and Sophia Rahman present a largely Romantic programme. Works by Germanic composers Johannes Brahms, Clara Schumann and Robert Schumann are complemented by a late nineteenth-century soaring and lyrical Romance by American composer Amy Beach, and a short movement, A Virtue, from Cork native Sam Perkin’s 9 Snapshots for Violin and Piano. This work was commissioned in 2012 by Ruxandra Petcu-Colan and Gabriela Mayer with funds from Cork City Council Arts Office. Sam writes that “each snapshot in this suite of intimate miniatures for Violin and Piano captures a cherished moment of friendship spent with friend and violinist Eoin Ducrot, student of Ruxandra Petcu-Colan”.

Brahms: Scherzo in C minor (from The F-A-E Sonata)

Sam Perkin: A Virtue from 9 Snapshots for Violin and Piano

Katherine has been Leader of the Irish Chamber Orchestra since 2002 and regularly directs from the leader’s chair. As director and soloist with the ICO, she has toured Germany, China and Singapore, and appeared at festivals including the West Cork Chamber Music Festival and Kilkenny Arts Festival. Katherine directs ICO national tours, which take the orchestra all over Ireland. In 2020, Katherine released a solo CD recording with the ICO of Piazzolla’s The Four Seasons of Buenos Aires and Schubert’s Rondo in A and received glowing reviews.

Katherine recently co-founded the Solas String Quartet, who enjoy devising eclectic, accessible programmes. They will tour Ireland in March 2023, supported by the National String Quartet Foundation. Her group The Far Flung Trio, with accordionist Dermot Dunne and bassist Malachy Robinson, delights audiences with its light-hearted approach. Their repertoire spans from Bach to Klezmer. They released a live recording in 2019. In 2020, Katherine became Artistic Director of the Killaloe Music Festival, for which she devises programmes to include world-class musicians.

She is currently a Lecturer at the MTU Cork School of Music and Artistic Director of the ConCorda chamber music course.

Sophia Rahman made the first UK recording of Florence Price’s piano concerto with the BBC National Orchestra of Wales, for broadcast on BBC Radio 3. She has recorded Shostakovich’s piano concerto Op. 35 with the Scottish Ensemble for Linn Records and over thirty-five chamber music discs for a host of international labels including CPO, Guild, Resonus, Dutton/Epoch, ASV and Champs Hill.

Sophia has appeared in recital with distinguished musicians including cellist Steven Isserlis, violinists Augustin Hadelich and Katherine Hunka and tenor Mark Padmore, as well as working frequently with her partner the violinist, violist and conductor Andres Kaljuste. Sophia has coached junior chamber music at the Sibelius Academy, Finland, Lilla Akademien, Sweden and Tallinn Music and Ballet School, Estonia, and specially designed a course for young Estonian musicians at the Arvo Pärt Centre where she regularly appears as a recitalist. Sophia is also known for her work as a class pianist at IMS Prussia Cove, where she has played for the classes of Kim Kashkashian, Atar Arad, Thomas Riebl, Hartmut Rohde and, for more than a decade, Steven Isserlis. Her interest in this field began as a class pianist for the legendary William Pleeth at the Britten-Pears School.

After early tuition with Antonietta Notariello, Sophia studied at the Yehudi Menuhin School under Peter Norris, with additional guidance from Vlado Perlemuter and Louis Kentner. She took a first-class honours degree in English from King’s College, London, and completed her piano studies at the Royal Academy of Music with Alexander Kelly and Malcolm Martineau. She was the winner of the Royal Overseas League’s Accompanist Award and the Liza Fuchsova Memorial Prize for a chamber music pianist in consecutive years.

Sophia is the Artistic Director of the Whittington Festival in Shropshire, held annually in the third week of May.

The Spotlight Chamber Music Series returns to Triskel this Winter. This popular lunchtime series is based on the principle of bringing together some of Ireland’s most dynamic and distinguished musicians to play with one another in small ensembles. Funded by the Arts Council and supported by Triskel, these concerts showcase a wide range of repertoire and a variety of instrumental formations.