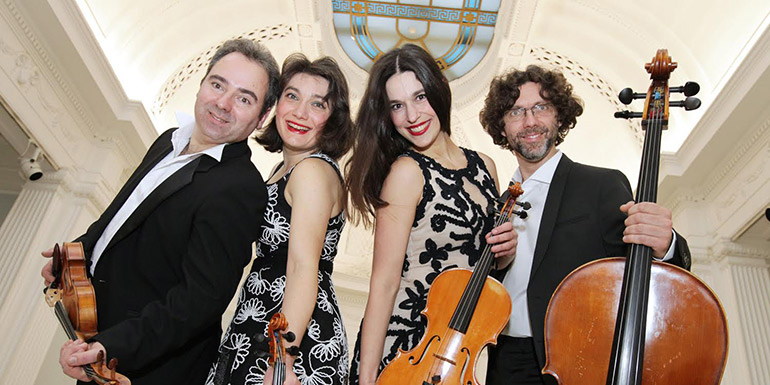 The Contempo Quartet is the resident quartet of the Galway Music Residency and was RTÉ’s Resident Quartet from 2014 until 2019.

The concert will go live at 8pm on Triskel’s Digital Stage on Friday 23 April and will be available for ticketholders to watch until 8pm on Sunday 25 April.

Praised as a “fabulous foursome” (Irish Independent) and noted for performances which are “exceptional” (The Strad) and “full of imaginative daring” (The Irish Times), RTÉ ConTempo Quartet has forged a unique place in Irish musical life.

Since its formation in Bucharest in 1995, the quartet has performed more than 1,800 concerts world-wide in 46 countries, including prestigious venues such as Wigmore Hall; Théâtre du Châtelet, Paris; St Martin-in-the-Fields; Berliner Philharmonie; Palazzo del Quirinale, Rome; Carnegie Hall and the Opera House Tel-Aviv. ConTempo have had the honour to meet and play in front of world personalities such as Prince Charles, Nelson Mandela, Pope John Paul II, EU Ministers, Michael D. Higgins, Hollywood stars and Nobel Prize winners. The ensemble has won a record of 14 international prizes (including Munich, Rome, Berlin, Prague and London) and worked alongside artists of the highest calibre including Emma Johnson, Yuko Inoue, Hugh Tinney, Chen Zimbalista, Jérôme Pernoo, Peter Donohue and Martin Roscoe. Collaborations with other distinguished quartets have also been a feature, such as the Amadeus, Arditti, Vanbrugh, Casals and Endellion.