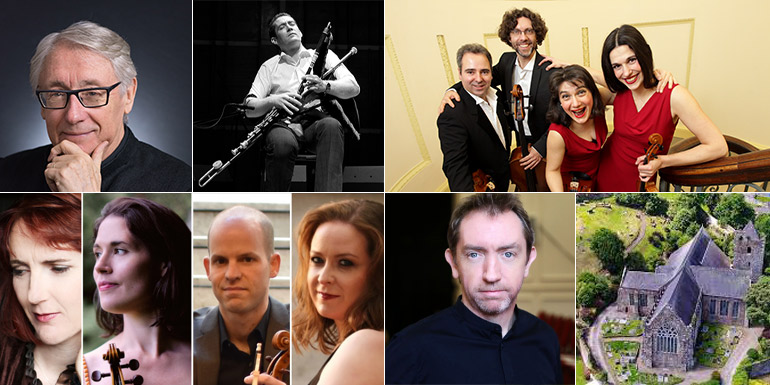 “Jubal’s Air” will be a stunning experience when it is performed live in the beautiful and historic setting of St. Mary’s. The joining together of not one but two string quartets when taken together with the solo virtuosity of David Power’s Uilleann Pipes will be an unforgettable and unique event. “Jubal’s Air” is a new and permanent legacy created especially for this important anniversary in Youghal, and will itself be added as a notable event in the history of the Church.

Kevin Volans is one of the foremost living Irish Composers. Originally born in South Africa, Volans became an Irish citizen in 1994. His work is acclaimed across the world. In 1997, the BBC Music Magazine listed him as one of the 50 most important living composers and he was described by the Village Voice (New York) as “one of the most original and unpredictable voices on the planet”. The composer’s 70th Birthday was recently celebrated at London’s Wigmore Hall and in Milan.

David Power is one of Ireland’s most renowned Uilleann Pipes players. From Dungarvan, David has performed the work of Kevin Volans in the past – most notably at the National Concert Hall in Dublin, where a Concerto for Uilleann Pipes and Orchestra was written by the composer especially for him.

“Uilleann piper David Power is a born collaborator. His incisive, fluid piping style has seen him work with a wide range of musicians and composers.” – The Irish Times

“ …his phrasing and meticulous employment of bent notes and timbral alterations cracked the heart of the tune wide open, making it unspeakably desolate, yet as beautiful as death itself.” – Sydney Morning Herald.

Formed in 1995 in Bucharest, ConTempo Quartet is recognised as one of the most exciting and vibrant chamber ensembles performing today. It has performed world-wide in many prestigious venues, winning prizes at competitions in Munich, Rome and London, and worked alongside artists of the highest calibre. It has broadcast widely on European radio and premiered and recorded many contemporary pieces. ConTempo Quartet was chosen as Galway Music Residency’s Ensemble in Residence in 2003 and continues to captivate audiences throughout the city and county with its repertoire of classical, contemporary, folk and traditional music. In June 2016 the members were conferred with Honorary Doctorates in Music by NUI Galway in recognition of their role in promoting music and education in the West of Ireland. In 2013 ConTempo was also appointed RTÉ’s Quartet in Residence.

Ficino Ensemble was formed by Artistic Director Nathan Sherman in 2012 as a flexible chamber music group that performs all the great music for small ensembles, ranging from string trios to works written for larger ensembles. Ficino Ensemble’s aim is to perform works that appeal to a discerning audience whilst championing lesser known works that deserve to be appreciated. To date, they been invited to play for President Michael D. Higgins, Howth Chamber Music Series, Music in Kilkenny Series, Hugh Lane Sundays@Noon Series, Cork Orchestral Society and the Irish Georgian Society. They performed a highly successful chamber music series at the National Concert Hall in August 2016. Upcoming engagements include performances at Music for Galway, Kaleidoscope Dublin, the Hugh Lane Gallery, Musictown Festival and Festiv’ards Portaferry. ​Their concerts have been described as exciting and intimate with a high calibre of ensemble playing. The members of the group are recognized in Ireland and abroad as soloists and chamber musicians.

David Brophy is a former Principal Conductor of the RTÉ Concert Orchestra and has collaborated with many internationally acclaimed soloists including Lesley Garret, Sir James Galway, Lang Lang and Nicola Benedetti to name but a few. His work with specialist new music ensembles, among them Vox 21 and Crash Ensemble, has led to numerous premieres including the Irish premiere of Steve Reich’s Music for Eighteen Musicians and Andre Previn’s A Streetcar Named Desire, alongside recent world premieres of arrangements by Nico Muhly for traditional Irish singer, Iarla Ó Lionáird. David’s operatic work has led to wide acclaim, partnering Lyric Opera Productions, Opera Theatre Company, Opera Ireland, Glasthule Opera and Northern Ireland Opera, most notably in their recent acclaimed partnership with the Irish Chamber Orchestra, directing Handel’s Radamisto. Beyond the realm of strictly musical performances, he has regularly collaborated in concert with major international actors, including Brendan Gleeson, Fiona Shaw, Stephen Rae and Adrian Dunbar.

Please note that ticket sales are being managed by St Mary’s Collegiate Church and you will be taken to an external site to complete your purchase.