Vladimir and Anton – The Violinists | Triskel Christchurch
We are committed to the Health & Safety of our staff and audiences. And we are operating under the agreed protocols described under "Guidance documents for the Safe Operations of Cinemas during COVID-19 Resilience and Recovery 2020-2021", a copy of which can be found here.
Live Music
Cinema
Visual Art
Festivals
Education
Special Events

Vladimir and Anton – The Violinists 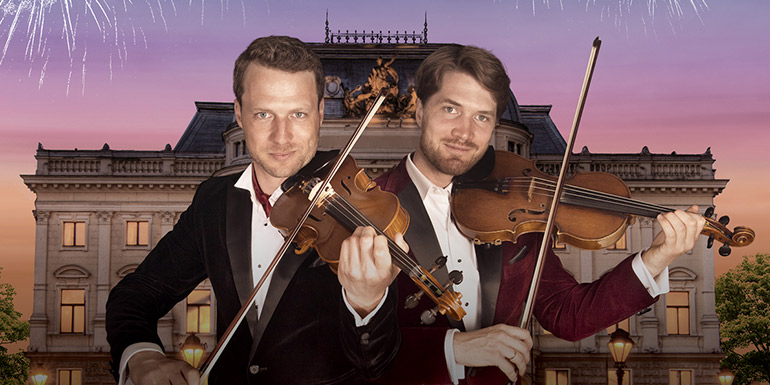 An evening of songs and melodies we all love and remember, including ‘Que Sera Sera’, ‘Hungarian Dance No 5’, Russia’s ‘Kalinka’, Jewish dance ‘Hava Nagila’, ‘Danny Boy’ and ‘Those Were The Days’ and many more.

Slovakian brothers Vladimir and Anton are the fourth generation of professional musicians. Their unique style was inspired by travelling Europe with the family ensemble.

Aged 19, Vladimir was due to start his studies at The Academy of Performing Arts in Bratislava, in his father’s violin classes, but a last minute change of heart made him decide to take a break from classical music altogether, and travel to Ireland. Just three weeks into his adventure, the loss of music in his life had a profound effect on the young man and in an effort to gain perspective and earn some much needed money, he started busking on the streets of Dublin. Performing the popular Viennese music of his homeland on the iconic Grafton Street, he found pleasure in entertaining the regular commuters that passed him daily. Ultimately he was fated to move from the street corners onto the concert circuit of Ireland.

Anton continued studying music at some of the best European Universities, sometimes changing courses so he could study under some of the best tutors in the genre. Although learning classical violin, his curiosity inspired him to explore jazz and traditional gypsy music as well as inventing unconventional bow and pizzicato techniques.He had the chance to work with his brother for several one-off performances but after earning his second Masters degree, he decided to join his brother and embark on this new artistic journey.