In association with Cork Folk Festival 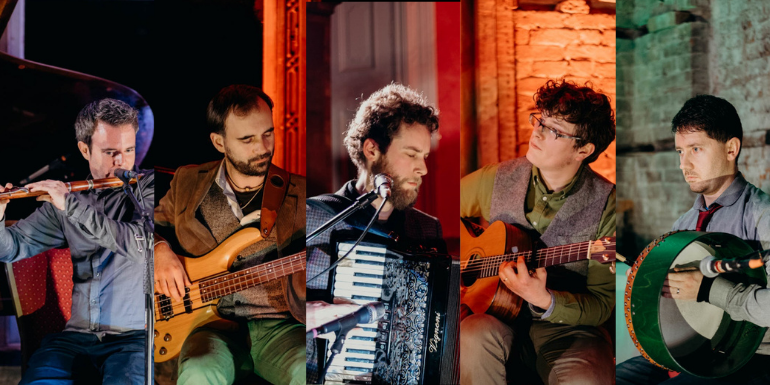 Torcán is a new-style trad band led by multiple All-Ireland Fleadh and Munster Fleadh medallist Jason Turk, who have been playing regularly on the Cork City and county scene for the past 10 years.

Jason and Robin Turk, brothers originally from Co Waterford, co-founded the UCC Capriccio society in 2004 to cater for on-campus experimental music styles and performances, and the following year began playing regular gigs in Cork City under the name “Torcán” (a play-on their surname and also Gaeilge for “a little boar”).

Around the beginning of 2011, Jason and Robin were joined by Cork musicians Seán Murphy and Brian Leach to rehearse, record and perform as Torcán. Over the past decade, Torcán have played at such prestigious concert venues as the Cork Opera House, Royal Hospital Kilmainham, Kilworth Village Arts Centre, Ballincollig White Horse, Fota House, Townlands Carnival, Camden Palace, the Oliver Plunkett and Cork’s English Market … as well as performing weekly gigs at the South County Bar in Douglas, and playing at numerous wedding venues, céilís, folk festivals, corporate performances and sessions in Cork City.
In 2018, Torcán were joined by renowned flute and bodhrán player, Karl Nesbitt, a well-respected performer with the Celtic Woman tour, music arranger, composer and medallist at the All-Ireland Fleadh.

Torcán are in the process of recording material for their debut album and many of the tracks earmarked for the album will be performed live at the Triskel open-air concert. The band have been happily rehearsing for this performance and are thrilled to be offered the opportunity to play together as a band again. The music will be a mixture of popular trad arrangements, alternative music adaptations and newly composed material.