Three Identical Strangers | Triskel Christchurch
We are committed to the Health & Safety of our staff and audiences. And we are operating under the agreed protocols described under "Guidance documents for the Safe Operations of Cinemas during COVID-19 Resilience and Recovery 2020-2021", a copy of which can be found here.
Live Music
Cinema
Visual Art
Festivals
Education
Special Events

Back By Popular Demand 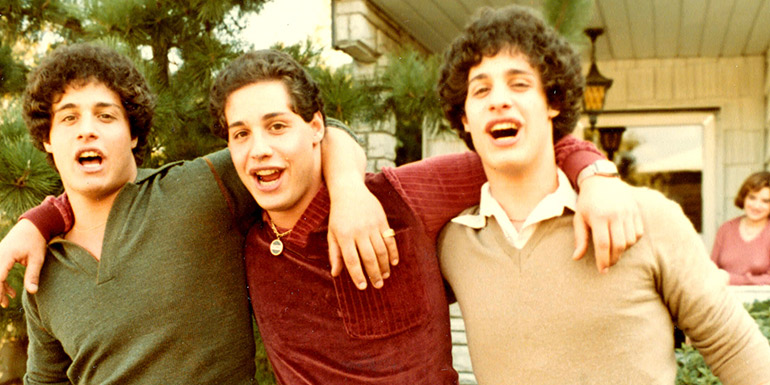 This compelling documentary tells the astonishing story of three men who make the chance discovery, at the age of 19, that they are identical triplets, separated at birth and adopted to different parents. “I wouldn’t believe the story if someone else were telling it, but it’s true.” The opening line of the film encapsulates the almost unbelievable quality of this true story, which made headlines at the time of its discovery in the early 1980s. The brothers are ecstatic at their newfound siblings and celebrity status, appearing in the Madonna movie Desperately Seeking Susan and opening a steakhouse in Soho called Triplets.

This joyous reunion takes an unsettling turn as the film progresses. Gradually morphing from feelgood human interest story to something darker, a shocking revelation has radical repercussions. Sinister secrets are uncovered, and a conspiracy emerges which ensure that this documentary is utterly engrossing right to its disturbing end.