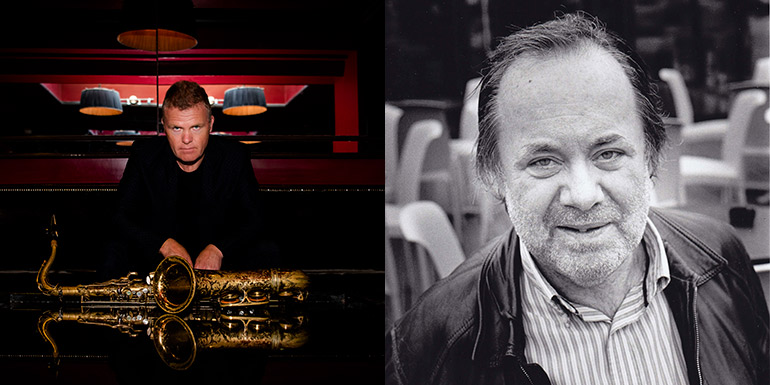 ECM Recording Artist and Saxophonist Iain Ballamy has composed a setting of the poem ‘The Owl’ by the late Matthew Sweeney. Co-commissioned by Triskel Arts Centre and Cork World Book Fest, and supported by The Arts Council Commissioning Award for Music, this work will be performed as a world premiere as part of Cork World Book Fest 2022 and is a personal tribute by the Composer to Matthew Sweeney who was a leading poet of his generation.

The poem will be recited by renowned actor Denis Conway

“Matthew Sweeney sent this striking poem to me in November 2017. I promised him that whatever was to come, I would make a setting for ‘The Owl’ and would not rest until that had happened. With kind support from Tony Sheehan, Mary Noonan, Cork World Book Fest and the Arts Council of Ireland, this promise has now been fulfilled.

“It wasn’t long after I started work on the setting that I realised this was not going to be an easy thing to do. How to make music that would not get in the way of or distract from the words as they were read? In choosing the musicians, I knew Matthew loved Huw Warren and Matthew Sharp as we worked together before. But I felt the poem also needed percussion and dynamic range to punctuate the space and add an extra dimension. After some weeks I realised the answer was staring me in the face all along in the form of Roy Dodds, a highly perceptive and empathetic musician who I had worked with many years ago. Roy was the missing link and I am delighted to be working with him again.” Iain Ballamy

The music opens with a prelude; the main theme and motif, representing the owl with his silent message, are introduced. The convoluted and encrypted motif in the melody signifies the Owl’s presence throughout the piece. The setting follows the twelve verses of The Owl each with their own musical title derived from the poem. There are moments of texture and lightness as well as darkness and periods of calm. Some of the piece is precisely scored; other parts are punctuated with space for improvisation and atmospheric tension. ‘Unmoved’ (part 11) differs in that it is written entirely as a graphic score, enabling the musicians to personally interpret and express the anger and frustration at that point in the poem entirely from their perspective.

The closing ‘air’ is called ‘Donegal Son’. It is in the age-old style of an Irish folk song and is a personal and heartfelt musical eulogy to Matthew. My tribute to a much missed and dearly loved friend.

Matthew Sweeney
Matthew Sweeney (1952-2018) published a total of 16 collections of poetry, 5 collections of poetry for children and 2 novels for children. In addition, he edited a number of anthologies of poetry for both adults and children, many of them published by Faber and Faber. He worked throughout his life as a teacher of poetry, and held numerous residencies in universities and other institutions. He was a member of Aosdána, and his poetry won many awards. His poetry was translated into many languages. In particular, two collections were translated into German by Jan Wagner, one of the leading German contemporary poets. Matthew’s work is highly regarded in Germany, and his reputation continues to grow there.

Matthew often collaborated with other artists, especially musicians. He worked with British saxophonist Iain Ballamy on a number of occasions. In 2001 Matthew and Iain were jointly commissioned by the Jerwood Foundation to mark the opening of the Jerwood Library of the Performing Arts at Trinity Laban Conservatoire of Music in Greenwich, London. The piece created was entitled ‘Black Beams’. It opened with a brass fanfare and continued with a musical procession past massed saxophonists from the college stationed on the stairs and lining the route. Music echoed through the building as the guests climbed several flights of stairs to reach the magnificent newly completed library situated within the ancient roof space.

Not long after ‘Black Beams’ Matthew moved to Berlin and he worked with Iain again, this time with the virtuoso Norwegian accordionist Stian Carstensen. It was freezing in mid-winter. They performed a memorable two concerts as a trio at the B Flat jazz club in Berlin.

Matthew and Iain’s last big collaboration was a co-commission by Manchester Jazz and Literary festivals in 2015. An ambitious combined arts project named with Matthew, Dave McKean the noted graphic artist and film director and Iain. Matthew was sent to Manchester like an undercover agent to stay for a week and explore the sights, sounds and historical landmarks. His mission was to return with a collection of poems about the city. These poems were transformed into songs and set to film and images to be premiered live at the Whitworth Gallery and Royal Northern College of Music. The work, entitled ‘An Ape’s Progress’, was performed in 2015 by Matthew, Iain and a small group of musicians at the Manchester Jazz Festival and the Manchester Literature Festival, to great acclaim.

‘Meeting Matthew Sweeney’ by Iain Ballamy
When I last saw Matthew it was in this very place – the Triskel Arts Centre. He was clearly not well but the consultants hadn’t yet diagnosed what was wrong. In the coming months as one diagnosis was dismissed only to be replaced by another, Matthew felt like he was living in limbo, not knowing where he was heading and what to expect. He felt as if the sword of Damocles was poised above him and was in this predicament when he wrote this extraordinary poem. The Owl provides deep insight to his mind, inner thoughts and feelings of anger and helplessness. The first couple of times I read ‘The Owl’ I found it very hard to get my head around. It is so brutally honest to stare your own mortality in the face with no escape and to write about it in that way. I found it disturbing but also strangely calming, both chilling and compelling.

Matthew Sweeney was unique. One of those people you are lucky to meet once in a lifetime. Becoming friends with Matthew and working with him for over twenty years has left a lasting impression on me – he was quirky, serious, funny, entertaining, feisty, well-travelled, loved red wine and he especially LOVED jazz! We met in the late-nineties when we were both invited to appear on ‘Jazz With Julian Joseph’ a series made by Meridian / ITV. I was immediately struck by Matthew’s poetry – each poem showed a most extraordinary flight of fantasy or an unpredictable stream of consciousness from beginning to end. Some poems such as ‘Crossing’ made my mind race and my imagination run wild. After filming we made off with a bottle of red wine from the green room and ran to the station. We bonded over that bottle of wine on the train back to London, talking and laughing the whole way. He already felt like an old friend by the time we pulled into Waterloo…