The New Past by Bennie Reilly 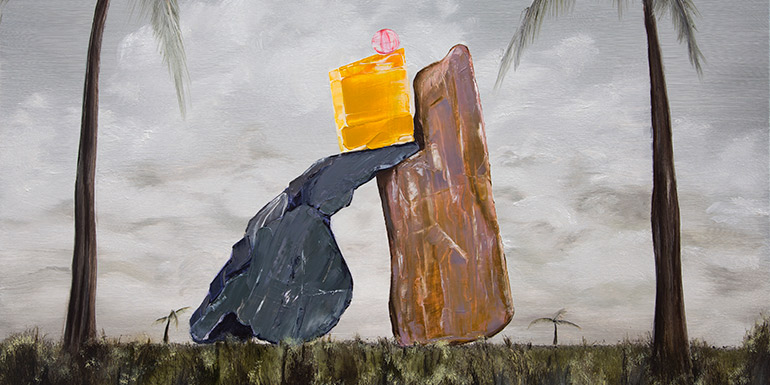 Bennie Reilly’s work has always dealt with aspects of the natural world and its peculiarities. Her latest exhibition, The New Past, is a collection of paintings and sculptural objects that present a flux of both accepted and questionable historical fact. Informed by an interest in museology, it is built upon an eclectic accumulation of curios and photographic research.

Reilly said, “The origin of these objects and images are amalgams of place and time, giving lie to their casual suggestion of archival certainty. By the acts of collecting, hoarding, classifying (or reclassifying), melding and mixing objects within a museological framework, I want to create artefacts to perplex the archaeologists of the future.”

Reilly, who studied fine art at IADT Dun Laoghaire and graduated from Kingston University in 2008 with an MA in illustration, has visited and photographed the collections of over thirty museums throughout Europe and the US. Her most recent research trip to Philadelphia and the Smithsonian Institute in Washington DC in 2017 was funded by the Thomas Dammann Jnr Memorial Trust. Her favourite piece is always the one she is about to make.

Artist Bio
Bennie Reilly’s practice is informed by museology, natural history and the core act of collecting. Her research has taken her to museums throughout Europe and the US and to remote residencies in Iceland, Norway and in Ireland.

Graduating from the Institute of Art & Design, Dún Laoghaire, in 2004 and receiving an MA in illustration from Kingston University, London, in 2008, Reilly has since exhibited across Europe and in Ireland with seven solo exhibitions to date including Rara Avis at the Royal Hibernian Academy, Dublin, and her most recent Small Pieces of Precarious Life at Dunamaise Arts Centre, Portlaoise. In 2017 Reilly received the Thomas Dammann Jnr Memorial Trust Award to fund a research trip to The Smithsonian Institute in Washington DC.