The Kevin Brady Electric Quartet | Triskel Arts Centre
We are committed to the Health & Safety of our staff and audiences. And we are operating under the agreed protocols described under "Guidance documents for the Safe Operations of Cinemas during COVID-19 Resilience and Recovery 2020-2021", a copy of which can be found here.
Live Music
Cinema
Visual Art
Festivals
Education
Special Events 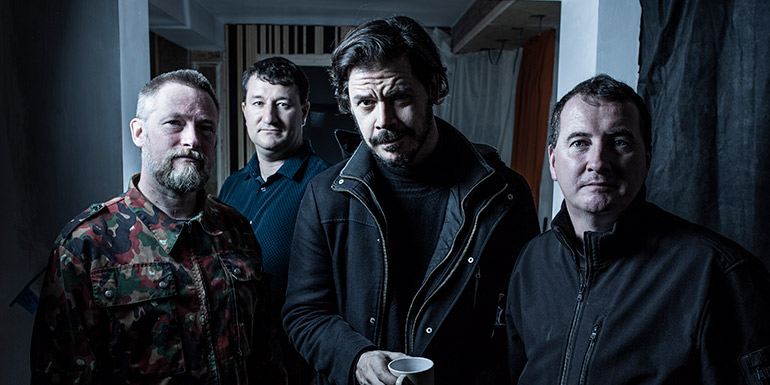 The Kevin Brady Electric Quartet has a clear aim of creating and producing new contemporary jazz and the impact of this has been immediate.

Their performances have been critically acclaimed for their dynamism and musicality. Touring regularly, they have consolidated their worldwide reputation as a compelling live act. As quoted by The Telegraph UK,  “This group display an enviable poise and togetherness”, winning the appreciation of discerning jazz audiences in the USA, Europe, UK, China. Their music embraces imaginative creativity and contributes to the evolution of exciting and engaging improvised music.

Plan B is the latest studio album by acclaimed drummer and composer Kevin Brady. It features the stellar musical talents of US saxophonist Seamus Blake, Bill Carrothers on Fender Rhodes, and bassist Dave Redmond. Brady’s ambition was to record an album that consisted of new, original compositions that explore improvisation in an electric quartet format. While tipping their collective hat to the music of the 1970’s Miles Davis Group, along with the groove and funk based music of Herbie Hancock, many of the musical themes deal with the impact of what is happening in the world as we know it now. The music is hypnotically insistent, all with a lasting story of experience and optimism.

Kevin describes the sound of Plan B: “This is one of the most musically connected experiences that I have had since my first outing as a leader in 2007. While I was working with the late great guitarist Larry Coryell, I had many insightful discussions with him about music. His suggestion for my group to explore a change to an electric format was hugely influential on my new musical direction. I had been performing with Bill Carrothers and Dave Redmond in a piano trio for many years and I was excited to hear how we would perform with this new instrumentation.

The inclusion of my friend and wonderful saxophonist Seamus Blake made a significant impact on how the trio performed. Seamus added an incredible musical dimension and texture to the compositions. His musicality added so much to the work. The music whether simple or complex was brought to another level by Bill and Dave’s strong melodic and rhythmic understanding and intuition. I believe that each composition – whether groove based, free or in odd meters – encapsulates and blends elements of musical styles that each musician in this quartet really enjoys playing.”

Kevin has recently signed with Ubuntu Music for the launch of this new album and discusses his new relationship with them: “I am delighted to begin this new relationship with Ubuntu. the company’s ethos is a perfect fit for me as an artist. The projects that Martin Hummel currently works with is a testament to his belief in nurturing and developing great music. After many discussions with him, it was apparent to me that he has a huge appreciation for music and developing the audience for it. He has such an in depth understanding of this genre of music and it’s a real honour to be included on Ubuntu Music’s artist roster. I am really looking forward to releasing this recording project and continuing our journey into the future.”

Martin Hummel, Director of Ubuntu Music, shares his perspective: “It’s a blessing to have the opportunity to work with Kevin and his band. I was fortunate to have the privilege to have Dave perform on an earlier Ubuntu release with pianist George Colligan, along with Seamus on an album with Eric Alexander. And now these guys come together with Bill Carrothers, and you have one very serious jazz music cocktail. It’s a pleasure to have them join the Ubuntu Music Family.”

Kevin Brady is one of the most sought-after drummers on the music scene. As quoted by jazz critic, John Kelman of All About Jazz, “Brady is an impressive drummer with impeccable taste, creative and, most notably, terrific tone”. He has accumulated a wealth of experience performing with some of the world’s leading exponents of jazz and improvised music, recording and playing with internationally renowned musicians such as Larry Coryell, Lage Lund, Peter Bernstein, Norma Winstone, Brian Charette, Ronnie Cuber, Perico Sambeat, Van Morrison, Bobby Watson, Randy Ingram, Lars Jansson and Nir Felder. He has performed double-bill concerts with acts such as Kurt Elling, Herbie Hancock’s Headhunters, Andrew Hill, Swedish piano trio EST and soul legend Gil-Scott Heron. Kevin is also an endorsed artist with Zildjian Cymbals, Vic Firth Drumsticks & Evans Drumheads.

Bill Carrothers is quite exceptional in this setting, having recorded with many acclaimed groups performing and recording with luminaries such as Gary Peacock, Billy Higgins, Dave Douglas and Curtis Fuller. He has performed sell-out residencies at the prestigious NYC jazz club, The Village Vanguard. He has been nominated for a French Gramophone Award for his solo album release, Excelsior, which is a collection of improvised piano pieces. Carrothers continues to raise the bar of jazz piano playing internationally.

Seamus Blake is one of the finest saxophonists on the music scene today. He has worked with a wide variety of artists. As a long-standing member of the Grammy-nominated Mingus Big Band, he is featured on six of their albums. Seamus continues to record and perform with artists such as Bill Stewart, David Kikowski, Antonio Sanchez, Kenny Barron, Sam Yahel, Randy Brecker, Wayne Krantz, Maria Schneider, Brad Mehldau, Brian Blade and Jack De Johnette. He has to date recorded on over 75 studio albums.