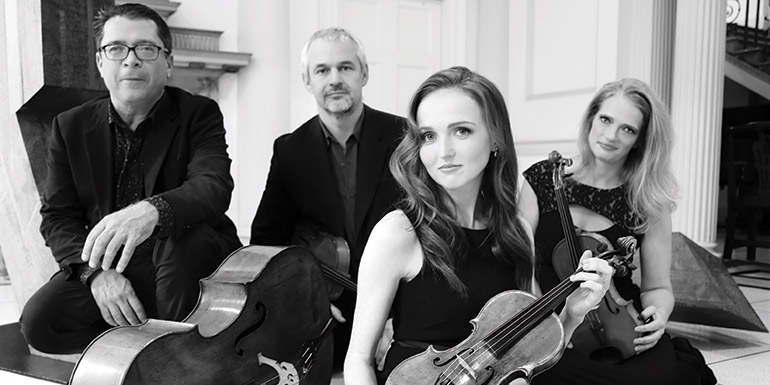 The third concert in the Beethoven Reflected series

For the final concert of the series, Donnacha Dennehy presents a new companion piece for Beethoven’s last and most reflective quartet, his F major quartet Op.135.

‘The pieces in this concert reflect upon each other, their makers or the myths around the music. Janacek’s first string quartet, “Kreutzer Sonata”, not only relates to Beethoven’s sonata for violin and piano of the same name but also to Tolstoy’s novella in which the Beethoven piece features dramatically. It’s a response to a kind of myth that’s built up around Beethoven – Beethoven the romantic hero.

But Beethoven was not just that of course. Many think of his final complete quartet, Op. 135, as the most Haydn-esque of his late period. It hearkens back to the wit of his teacher, probably the leading writer of string quartets before Beethoven himself. I love the joy and the playful pushing of form in this quartet, where wrong turns work like viruses in the music. The quartet flies in the face of any kind of grand narrative for Beethoven’s final works. I like that it throws a spanner in the works. My short quartet, “Wig”, builds off some of the wrong turns in the 2nd movt. of Op. 135.’ – Donnacha Dennehy

Donnacha Dennehy’s music is marked by a sonic and rhythmic intensity and a kind of volatile tonality that travels in and out of an overtone-based focus. His fascination with the way time and light stretch and contract through the seasons of the year in his native Ireland, and the psychological impact of such phenomena, has often influenced the structure of his music generally. The intersection between words and music, and the vocal sean-nós (old style) tradition has exerted a strong pull over him too since he was a child attending informal get-togethers at his grandmother’s house in Kerry. “There’d be long, all-night sessions in my grandmother’s house with singing and poetry, and people remembering 30-stanza poems,” Dennehy told NPR. Returning to Ireland after studies abroad, principally at the University of Illinois in the US, Dennehy founded Crash Ensemble, Ireland’s now-renowned new music group, in 1997. Alongside the singers Dawn Upshaw and larla Ó Lionáird, Crash Ensemble features on the 2011 Nonesuch release of Dennehy’s music, entitled Grá agus Bás. Other releases include a number of NMC Records in London, Bedroom Community in Reykjavik and Cantaloupe in New York. He joined the music faculty at Princeton University in 2014, and now lives in America. In recent years, Dennehy has completed two operas with Enda Walsh, The Last Hotel and The Second Violinist. He has also written a kind of “docu-cantata”, The Hunger, for Alarm Will Sound.

The Esposito Quartet comprises four of our most distinguished musicians with a combined wealth of experience as recital artists, orchestral leaders and teachers, who have been playing as a quartet since 2010. The Esposito Quartet have enjoyed a 2018-19 residency at Dublin’s Kaleidoscope Night where they recently collaborated with the South African violist and overtone singer Gareth Lubbe. The Quartet’s name honours Michele Esposito, pianist and composer, who for forty years from 1888 was the initiator for much of the chamber music making in Dublin through the establishment of The Royal Dublin Society concert series.