Spotlight Chamber Music Series 2019 – II | Triskel Christchurch
We are committed to the Health & Safety of our staff and audiences. And we are operating under the agreed protocols described under "Guidance documents for the Safe Operations of Cinemas during COVID-19 Resilience and Recovery 2020-2021", a copy of which can be found here.
Live Music
Cinema
Visual Art
Festivals
Education
Special Events 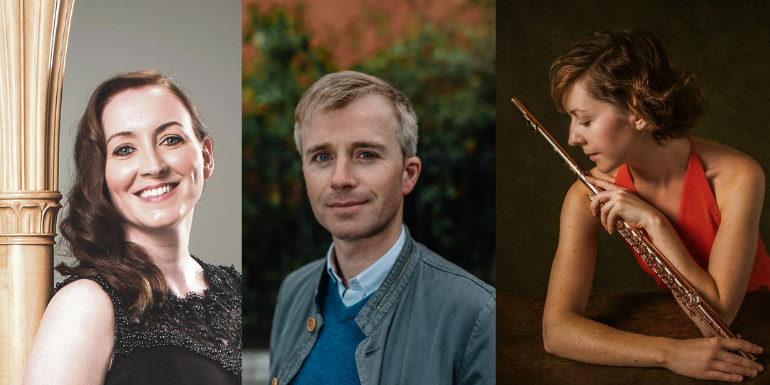 The second concert in the Spotlight Chamber Music Series will open with Japanese composer Tōru Takemitsu’s three-movement work Toward the Sea for Alto Flute and Harp, which was commissioned by Greenpeace for the Save the Whales campaign. Takemitsu wrote that the work “is a homage to the sea which creates all things and a sketch for the sea of tonality”.

Dystopia for Solo Flute by featured composer Solfa Carlile will follow, a piece which explores tension between fluid, improvised-sounding passages and a clear, lyrical melody line. The opening creates an apprehensive atmosphere which obscures a lyrical line, characterised by spontaneous accented notes. The lyrical melody comes to the fore midway through the piece, before once again descending into the chaos of the outset, this time more frantically, coming to a dramatic, shrill ending. The inspiration for the piece comes from the idea of a society which juxtaposes the beautiful with the grotesque. The beauty is hidden in the depths and eventually comes to light, but is oppressed by the overpowering darkness.

Two trios for flute, viola and harp will conclude the programme, works which were composed for this relatively unusual instrumentation mere months apart. London-born Arnold Bax’s strong affinity for Ireland led him to spend a great deal of time here; indeed, he was examining final-year BMus. students in UCC just before his untimely death in Cork in 1953. He wrote his single-movement Trio Elégiaque in 1916 as a tribute to friends of his who lost their lives in the Easter Rising earlier that year. Debussy’s three-movement trio sonata is the second entry in a projected series of six chamber sonatas (of which the composer completed only three) and was composed in 1915.