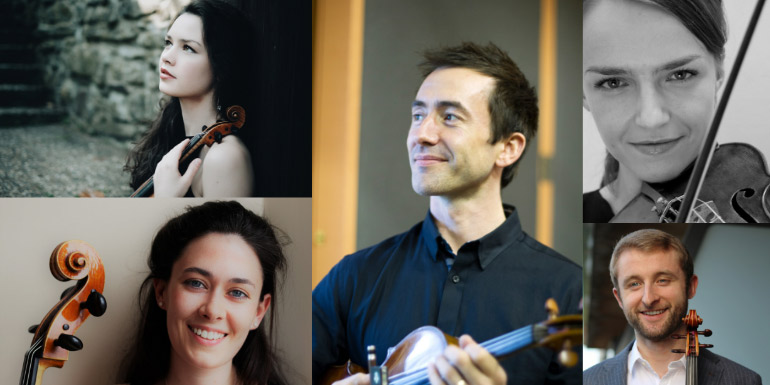 J.S. Bach’s fifteen Two-Part Inventions are a collection of short, contrapuntal pieces for keyboard, originally intended as musical exercises for his students. The first concert in the series will open with a selection of five of these brief Inventions, arranged for violin and cello.

These will be followed by Fables for String Quartet by Solfa Carlile, the featured composer of the Spotlight Chamber Music Series 2019. Fables is based on two folk melodies from the Edward Bunting collections. The first is Yourself Along with Me from Volume Three (1840); the second is The Fair-Haired Girl from Volume One (1796). The melodies are separated into fragments and fluid gestures, at times avoiding a strict sense of metre. The piece comprises two short attacca movements, contrasting in mood but with a similar harmonic underpinning. The melody on its own implies a certain conventional harmonic accompaniment, but this setting explores an alternative foundation, referring at times to ornamentation and melodic decoration apparent in the Irish music tradition.

The concert will conclude with Mozart’s G Minor Viola Quintet, a work shocking in its intense pathos and chromatic disquiet. Written in 1787 at the same time as the joyous and exuberant C Major Quintet, which was performed as part of the inaugural Spotlight Series, it is regarded as one of Mozart’s finest chamber works and is beloved by performers and audiences alike.