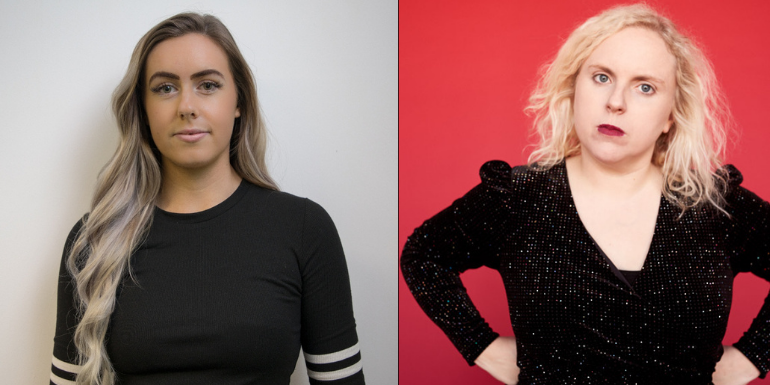 Plenty of chances to laugh along with Sinead and Laura because they’re giving two performances on Friday 6 August: 6.30 & 8.30pm!

Laura O’Mahony
Laura O’ Mahony has been standing up since she was born and has no intention of sitting down just yet. She’s a children’s TV presenter and radio host but mainly she’s just gas craic. You might have seen her on telly…now you can see her in real life too!

Sinéad Quinlan
Sinéad Quinlan is a brand new comedian and writer from Cork. She made the completely rational decision to enter a stand up comedy competition while eating taco fries in Hillbillies, having only ever done stand up twice. She went on to win Stand Up and Be Funny on RTÉ One with only seven gigs under her belt. What was in those taco fries?
The prize for winning was a pilot with the RTÉ Player and she went on to write and star in her own online comedy series called Seriously, Sinéad?. The series was later given a television slot on RTÉ Two which is very rare.
Sinéad then landed the role of the ‘Roving Reporter’ on the reboot series of The Den alongside Ray D’Arcy, Dustin the Turkey and Zig and Zag. She was a guest on comedy panel show Clear History on RTÉ Two at the start of 2021 and is currently writing a second series for Seriously, Sinéad?
Sinéad has performed in comedy clubs all over Ireland such as City Limits (Cork) and The Róisín Dubh (Galway) and is looking forward to getting on stage again soon.