Short Circuit | Triskel Christchurch
We are committed to the Health & Safety of our staff and audiences. And we are operating under the agreed protocols described under "Guidance documents for the Safe Operations of Cinemas during COVID-19 Resilience and Recovery 2020-2021", a copy of which can be found here.
Live Music
Cinema
Visual Art
Festivals
Education
Special Events 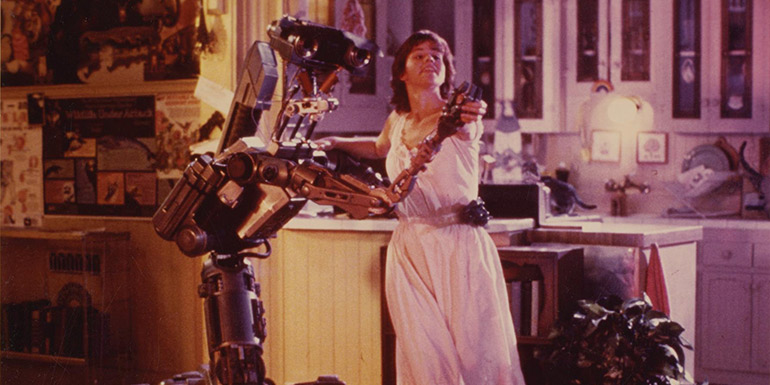 In this classic 80’s sci-fi comedy, an experimental military robot escapes after being struck by lightning and given human intelligence. He finds a home with a kind-hearted young woman, played by Stephanie Speck, who believes he’s an alien. Filmed in the same small Oregon town as The Goonies (1985) and Kindergarten Cop (1990), this nostalgic flick and the endearing rogue robot, Number 5, will appeal to all ages.

On Friday 8th March there will be a screening of the eighties box office hit Short Circuit which will be followed by a public discussion with McLean and Hot Press writer Wayne Byrne focussing on McLean’s storied career (the duo has just co-authored a book on McLean’s life and prolific work behind the camera). Later on the same evening, McLean will introduce a screening of the cult action movie Cobra.

Please note that the public discussion with Nick McLean will be part of the Short Circuit ticket price.