Scullion | Triskel Arts Centre
We are committed to the Health & Safety of our staff and audiences. And we are operating under the agreed protocols described under "Guidance documents for the Safe Operations of Cinemas during COVID-19 Resilience and Recovery 2020-2021", a copy of which can be found here.
Live Music
Cinema
Visual Art
Festivals
Education
Special Events 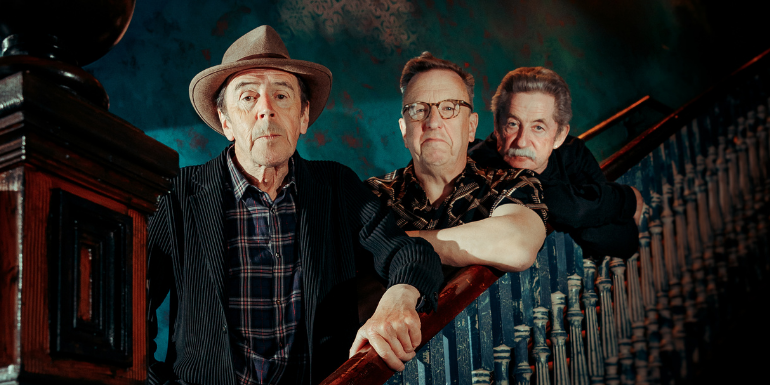 Scullion have been singing and playing everywhere from bar rooms to box rooms the world over for several decades.

Scullion was formed in Ireland in the late 70s at a time of great musical innovation. Bands such as Planxty, The Bothy Band and De Danann were at their creative peak and legendary Irish label Mulligan Records was releasing The Boomtown Rats, The Radiators, Midnight Well, Sonny Condell and Scullion.

Scullion has always been a coming together of different musical strands and traditions. The mainstay of the band was and is Sonny Condell. Sonny writes music and songs that are powerful, poetic and soulful. He is one of Irelands most enduring creative artists and, along with guitarist Robbie Overson and vocalist Philip King, creates the signature sound of Scullion.

Scullion grew from a chance meeting in the late 70s of its two founding members Philip King and Sonny Condell. Sonny and Philip have not so much floated as careened below the radar for over three decades now. Though never quite cementing themselves as mainstream hitmakings, beautifully crafted songs such as ‘Carol’, ‘Down in the City’ and ‘Eyelids Into Snow’ have endured as timeless, emotive songs that have made lasting impressions on the listener.

Of the band right now, Sonny has noted that “The band never stopped, we just have some periods of intense rest! Philip is a successful film maker and broadcaster and produces Other Voices and I have my own band and recording career, and Robbie plays music the world over, so we just come together when the time is right.”

And right now is the right time for Scullion who will be continuing on their successful ‘Down in City’ series after a sold out run of gigs in the Sugar Club last year featuring a number of guests and musicans including Saint Sister, Caoimhín O’Raghallaigh, Martin Hayes, Ye Vagabonds, Lisa O’Neill and Glen Hansard.