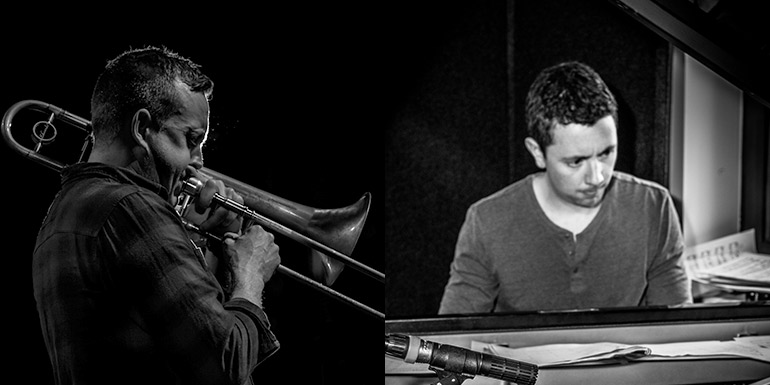 Presenting two inimitable and formidable jazz musicians, Corkonians Paul Dunlea and Cormac McCarthy who are joining forces in a set to include both standards and original compositions.

Although at home in a variety of musical styles, trombonist, composer and arranger Paul Dunlea focuses primarily on jazz and improvisation. He has performed, toured and recorded with the likes of Michael Bublé, Cassandra Wilson, Frankie Valli, Liam Ó Maonlaoi, Mick Flannery, The RTÉ Concert Orchestra, The Dublin City Jazz Orchestra, The New Irish Jazz Orchestra, The Syd Lawrence Orchestra and Hot House Big Band. A graduate of the CIT Cork School of Music, where he obtained both a Bachelor Degree in Trombone Performance and a Master’s Degree in Composition, he has held the chair of Principal Trombone with the Band 1 Brigade, Irish Defence Forces, since 2001.

Composer, arranger and pianist Cormac McCarthy began studying piano aged four and soon after discovered the joy of composition. A recipient of the prestigious Bill Whelan International Music Bursary, Cormac spent a number of years living in Chicago, where he completed a Master’s in Jazz Studies at DePaul University. His compositions and arrangements have been recorded by such jazz icons as Phil Woods and Jeff Hamilton. As a pianist, he has performed extensively at concert venues, clubs and festivals throughout Europe and the US, and has shared the stage/recording studio with artists across a wide musical spectrum, including Peter Washington, Nell Ní Chróinín, Billy Drummond, Liz Carroll, Donal Lunny, The RTÉ National Symphony Orchestra and The RTÉ Concert Orchestra. In 2015, Cormac released Cottage Evolution, his debut LP as bandleader, to widespread critical acclaim. He is also a member of Martin Hayes’ most recent project, The Common Ground Ensemble.