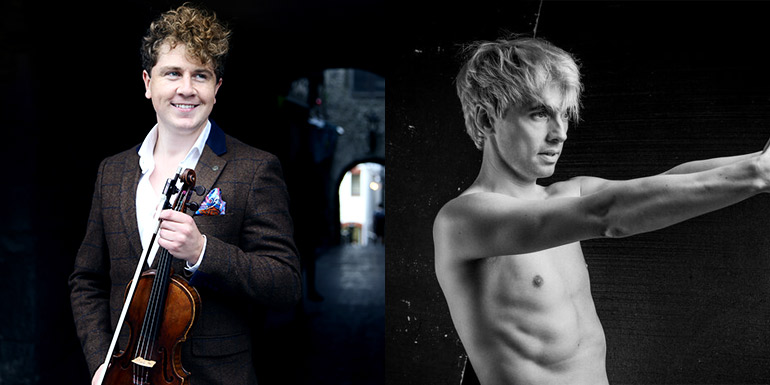 Classical violinist Patrick Rafter will work alongside artist and composer Sam Perkin at Triskel Arts Centre, Cork, to create “Freedom In Performance”. Motivated by a common desire to push the boundaries of performance practice and to challenge what is widely considered to be the accepted Concert Format, they will experiment with gesture and movement making these elements central to the final performance.

“There were moments when the two soloists could not be told apart. It’s no small feat to match a player of Vengerov’s calibre in this way” Michael Dervan, The Irish Times 2019

Regarded as one of Ireland’s most outstanding musicians, international award-winning violinist and conductor Patrick Rafter has toured Europe, the Middle East, South America and Asia as soloist, recitalist and chamber musician.  Internationally, Patrick has been the grand prize winner of multiple competitions including Valiant Violin Competition, Switzerland 2016 and the London Performing Arts Competition 2017.

During his career, Patrick has studied with and performed alongside some of the greatest performers in the world today, including Maxim Vengerov, Schlomo Mintz, Barry Douglas and John O’Conor. He has also worked with some of the most prominent composers of the world today, such as Arvo Part, and performed with some of the leading conductors including Semyon Bychkov, Marin Alsop, Sir Mark Elder and Gianedra Noseda. As a conductor, Patrick has directed the RTÉ Concert Orchestra in the finals of the RDS Feis Ceoil and has taken choral masterclasses with distinguished names such as Zoltan Pad and Volker Hempfling. In 2020, he became artistic director of Carlow Voices and in 2021, and was awarded the conducting fellow at U.C.D. Symphony Orchestra and Philharmonic Choir. He has performed as soloist with a host of the world’s leading orchestras and ensembles including Prague Philharmonia, Mannheim Soloists, National Symphony Orchestra, Kiev Soloists, Camerata Ireland. He has performed in some of the most prestigious concert halls such as National Concert Hall Ireland, Royal Albert Hall London, Berlin Konzerthaus and Concertgebouw Amsterdam and Seoul Arts Centre. He debuts as conductor with leading international orchestras in 2022 including Prague Philharmonia, RTÉ Concert Orchestra and Moravian Philharmonic.

A protégé of the legendary violinist, Maxim Vengerov, Patrick was born in 1991 into a musical family in Kilkenny, Ireland. He quickly became recognised as a prodigious talent winning over 50 national accolades. Patrick went on to receive a full scholarship to study at the Royal Irish Academy of Music (R.I.A.M.), studying with Eyal Kless and Fionnuala Hunt. In 2011, Patrick was awarded a scholarship to study at the Royal Academy of Music (RAM) London, where he graduated with first class honours and was awarded multiple prizes throughout his studies. He was also selected as a member of the R.A.M. ‘s elite string ensemble ‘Sainsbury Royal Academy Soloists’ with whom he made his Wigmore Hall debut in January 2015.  Patrick has had multiple radio and television appearances, notably on BBC 1 and 2 (U.K.), Kanal 5 TV (Macedonia), RAI (Italy), RTÉ (Ireland) and TG4 (Ireland), Kol Hamusica (Israel).

Patrick is supported by Music Network’s Music Capital Scheme, funded by The Department of Tourism, Culture, Arts, Gaeltacht, Sport and Media. Music Network is funded by The Arts Council. He performs on a Jean Baptiste Vuillaume 1842 Violin and a Eugene Sartory violin bow.

“A thing of mesmerising beauty.” — David Kettle, The Scotsman

Sam Perkin, who lives between France and Ireland, completed a residency in 2022 with Crash Ensemble, Ireland’s leading new music ensemble who play the most adventurous music of today.

Waves (2016-18) is an attempted self-cure for tinnitus and is one of the fruits of a bountiful collaboration between The Irish Chamber Orchestra and the composer. Language (2017), a substantial work for Solo Violin, was commissioned by West Cork Chamber Music Festival for contemporary violin specialist Miranda Cuckson and explores the inner workings of human languages.

Twitter (2018) for Flute Choir, Audience, Smartphones and Video was commissioned by La Côte Flûte Festival Switzerland. In more recent artistic work, Sam has been working with blending sine tones with acoustic instruments to make them glow, as in his Orchestra In The Digital Age (2019) for Orchestra and Sine Tones, for the CMC’s Composer Lab with the RTÉ NSO.

“xtagstartz3” (2019), composed for double bassist Caimin Gilmore, explored the musicality of children giggling. In Alta (2019), Sam collaborated with Finnish scientist and Northern Lights specialist, Unto K. Laine, to include the recently discovered and recorded sounds of the Aurora Borealis in a work commissioned by Alta Chamber Music Festival Norway.

Premièred in 2021, Sam’s highly visual and imaginative work Visualization (2021) was performed by Luminosa Orchestra at Galway Cathedral. Inspired by the work of Pauline Oliveros, Andrei Tarkovsky, and Dalcroze specialist Diane Daly, the new work signalled a ritualistic return to live performance in 2021.