Looking Back: Overburden by Fiona Kelly | Triskel Christchurch
We are committed to the Health & Safety of our staff and audiences. And we are operating under the agreed protocols described under "Guidance documents for the Safe Operations of Cinemas during COVID-19 Resilience and Recovery 2020-2021", a copy of which can be found here.
Live Music
Cinema
Visual Art
Festivals
Education
Special Events

Looking Back: Overburden by Fiona Kelly 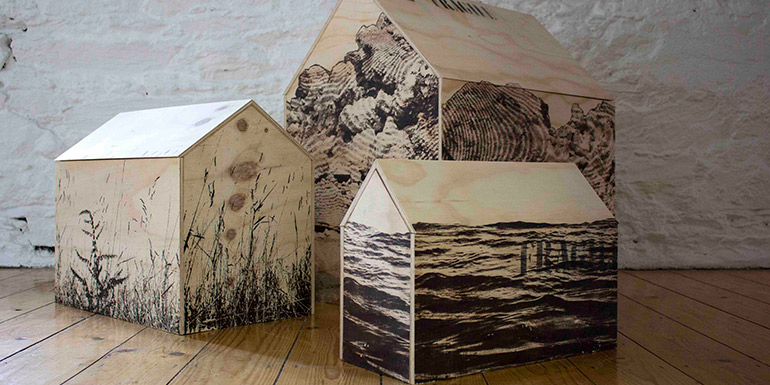 As our Gallery Space remains closed for now, we wanted to look back at the work that has filled this space. Fiona Kelly is drawn to the rapid metamorphosis of territory, both urban and rural, in an age of environmental crisis. Herexhibtion, Overburden, opened in Triskel Gallery Space on 16 January 2020 and closed unexpectedly on 12 March the same year. Since then, Fiona has been keeping herself occupied with a two-person show and a lecture for the National Sculpture Factory. These, combined with teaching in the Crawford College of Art & Design, has helped reduce the full sorrow of a locked studio.

Kelly examines questions surrounding the human ‘exploration’ of landscape, understood as both a relationship with nature and an extractivist approach to natural resources. Specifically, her research into wasteland and abandoned spaces addresses themes of ecology and society. ‘Overburden’ is an exhibition featuring recent and newly made works examining connections between the built environment, sense of place, displacement and topography.

De Certeau’s adage “stories about places are makeshift things, they are composed of the world’s debris” is a epitome of the individual practice of Fiona Kelly. The idea of this world’s debris manifests in the guise of material arrangements, foraged remnants, by-products of the urban landscape, which incorporate plywood, reconstituted waste and demolition material, crushed glass, dust, bitumen and scaffold like structures. These arrangements narrate a restlessness of ceaselessly shifting surfaces, resources, histories and topographies.

The idea of entropy; the gradual decline into disorder and the degradation of matter, is depicted throughout Kelly’s work. Both real and imagined interruptions or disturbances within the landscape are recorded, to visually narrate what can be considered modern fables that represent the humanistic failure to control the environment; we turn complex ecological systems into natural resources and mountains become overburden.

Artist Fiona Kelly usually cites thinker Michel de Certeau to introduce her practice: ‘stories about places are makeshift things, they are composed of the world’s debris’. She further elaborates that ‘her stories observe the rapid metamorphosis of landscape, both urban and rural, in this epoch of crisis’, and that ‘the idea of a world’s debris’ manifests in the guise of a re-appropriation of ‘materials in a state of rejection: concrete waste from demolition sites, crushed glass, cardboard, plywood, bitumen and limestone dust’.

The crisis to which Kelly refers is ecological. But she is not researching the causes or consequences of climate change, as one might assume in this epoch. Instead, she is examining questions surrounding the human exploration of territories, understood as an extractive approach to natural resources. In line with this, the materials that Kelly employs to make her works are, in her own words, ‘foraged remnants, the by-products of the landscape that has been subject to extraction’, which she transforms ‘to visually narrate what can be considered modern fables that represent the human failure to control the environment’.

The word ‘overburden’, which Kelly borrows to name this exhibition, encapsulates this circumstance. In mining, ‘overburden’ is the material that lies above an area that lends itself to economic exploitation – for instance the rock or soil above a coal seam or ore body. Mining, indeed, is the quintessential example of past and contemporary extraction, and thus its use by Kelly to articulate her current inquiry into the relationship between humans and nature makes sense. Yet Kelly takes this engagement a step further with the notion of ‘overburden’, when she states that ‘we turn complex ecological systems into natural resources … and mountains become overburden’, infusing the word with a sense of exhaustion. Kelly creates an anthropomorphic e_ect, assigning nature a human condition, which ultimately turns death – or extinction – into its inexorable destiny through the ‘degradation of matter’, as she puts it.

One of the works on view in the exhibition, which Kelly produced especially for this occasion, is a drawing in which the word ‘overburden’ is written with concrete dust on the gallery wall. The work is entitled Solastalgia, a neologism that describes a form of mental or existential distress caused by climate change. The title is a reference to thinker Glenn Albrecht, who employs this word to analyse the particular form of uneasiness that occurs when homelands, which ought to provide a feeling of safety, are altered by industrialisation, rendering them alienating. Beyond ecological, the ‘crisis’ to which Kelly refers is ‘social’. For instance, her work Homing (2019) evokes the ongoing headlines around migration to illuminate the truth behind fear-mongering reports in which refugees are vilified, thus helping to demonstrate that the current influx of persons seeking political asylum in Europe is just one symptom of a story that has roots in the North-South divide. The work examines displacement through the lens of the disruption of landscape, specifically its conversion into a ruin as result of extraction.

Homing consists of three wooden pieces, each taking the archetypical form of a house, onto which Kelly screen-printed depictions of landscapes – wild grasses, debris and the ocean – with bitumen, a common construction material. The house operates as an icon, conveying the notion of ‘home’ and the feelings attached to it. As Kelly says, ‘to be home is to be on familiar ground, or homing, to return by instinct to its territory after an absence’.

Homing articulates Kelly’s ongoing research into basic – in the primordial sense – structures, often makeshift or otherwise transient, that represent landscape in a state of flux. In her practice they become allegories of the historical and political conditions of land use and ownership.

This exhibition was co-produced with Cork Printmakers. Fiona Kelly is supported by Cork County Council.