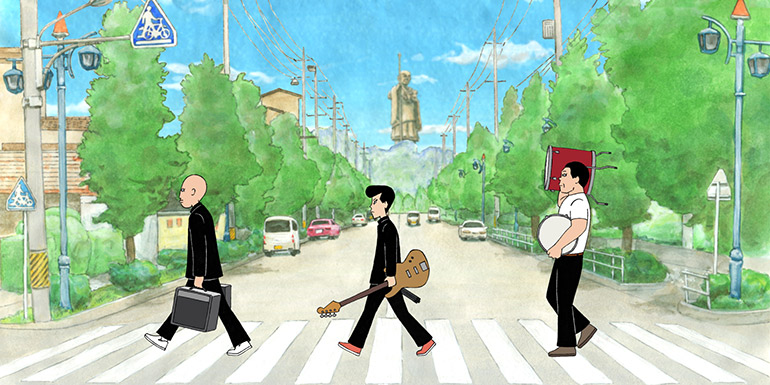 High school student Kenji and his two friends Asakura and Ota spend their afternoons getting into fights or lazily wasting time. One day, Kenji gets the sudden urge to start a band. His two friends decide to go along with it, despite none of them having ever played an instrument before. Despite an immediately obvious lack of talent, they soon recruit their classmate Aya as their first fan (and potential lead singer) and strike up an unlikely alliance with their school’s resident folk trio. Kenji and his bandmates quickly set a big goal for themselves: to perform in an upcoming local music festival. However, some of their enemies from a rival school are determined to stop that from happening.

Forget everything you know about anime, because On-Gaku is unlike anything you’ve seen. More deadpan than an episode of Daria but overflowing with brilliant ideas, Kenji Iwaisawa’s low-budget marvel makes the most out of every single frame. Often laugh-out-loud funny, the film also boasts a series of wildly imaginative and expressive music sequences that have to be seen to be believed. Seven years in the making, On-Gaku has emerged as a must-see indie anime.

Part of the Japanese Film Festival 2021