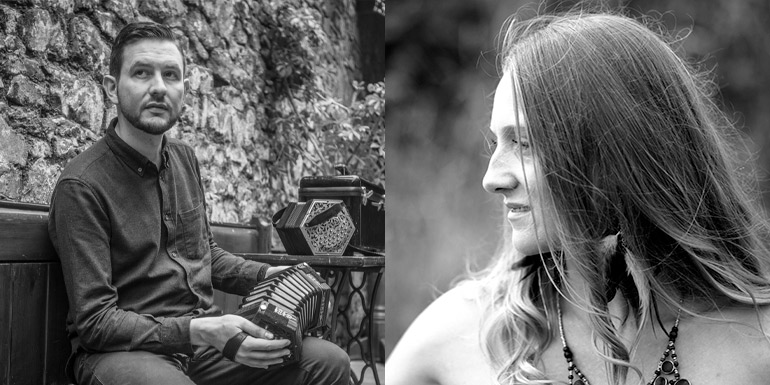 The opening concert of the Guinness Cork Jazz Festival at Triskel begins with a double bill with two Irish acts, NOTIFY and Aoife Doyle.

Multi-award winner Pádraig Rynne is a performer, composer, arranger, producer and is regarded as one of the finest traditional musicians of his generation. Well known for his high profile and challenging collaborations, Pádraig created NOTIFY in 2013 in response to a growing audience from his successful album title of the same name.

NOTIFY are an Irish 6-piece contemporary ensemble fronted by well-known concertina player Pádraig Rynne. The band seamlessly combines a deep knowledge of, and respect for, musical tradition with forward-thinking innovation, breathing new life into Irish music. The partnership of musicians with backgrounds in jazz, traditional Irish, avant-garde and folk music has resonated with audiences worldwide.

This instrumental band’s music uses Pádraig’s foundation in traditional Irish music combined with improvisation and inspiration from the world and jazz music genres to create a performance which takes the audience from soft compassionate melodies, to high energy arrangements that tell a story unique to each listener. At the crossroads of a new movement in Irish music, NOTIFY breathes new life into their music, with “a musical tapestry that ranges from soft melodies to crashing crescendos”.

Joining Pádraig on this concert is Tara Breen on Fiddle, Rory McCarthy on Keyboards, Davie Ryan on Drums, Michael Riordan on Electric Bass and Hugh Dillon on Acoustic & Electric Guitars.

“A rare thing indeed, to be able to take material, broadly traditional in character and make it zing into the present without any hint of effort or artifice, but he has managed to create another gem in an area which his has come to own, and  no contest.” – Ellen Crannitch, RTÉ Lyric FM.

Hot on the heels of her recently released album Infinitely Clear, Aoife Doyle will be joined for this special performance by pianist Luke Howard, bass player Barry Donohue and drummer Dominic Mullan. Infinitely Clear received a rapturous review from Hotpress Magazine and a glowing 5 star rating from The Irish Times. It was Marty Whelan’s ‘Album Of The Week’ on RTÉ Lyric FM and ‘Album Of The Month’ on The Acoustic Yard Radio Show.

Aoife has released three albums to date. Infinitely Clear is her second album of original music. It was released in April 2022 on independent label Rannagh Records. The album is a collection of Aoife’s own songs and features the singles ‘Strength To Be Strong’, ‘They Say’, ‘Clare Sky’ and ‘Love Conquers All’. It was produced by highly regarded musician, arranger, and producer Michael Buckley and features a host of stellar Irish musicians including Aoife’s longtime band – Johnny Taylor, Andrew Csibi, Dominic Mullan. All four singles were crowned ‘Track Of The Day’ by Hotpress Magazine with singles and album alike receiving extensive airplay on international, national, and local radio.

Aoife Doyle is originally from Bray, Co. Wicklow and is now living in Co. Clare. While she has been performing for many years, it was upon moving to the West Coast of Ireland that she found her songwriting voice.

“In Clare I had more quiet time to reflect. The lack of billboards, traffic and other superficial stimulation makes life a lot simpler. I think nature is the most primal form of creativity and living in the country and keeping a garden etc., you’re seeing the cycle of creation from seed, to plant, to harvest. Watching this cycle has helped me greatly to understand the nature of creativity as well as the time, attention and care you have to give to gain a fruitful harvest. This learning has facilitated my songwriting.”

She grew up in a house steeped in traditional Irish and folk music. Her lifelong love of jazz and blues began as a teenager after hearing Billie Holiday singing ‘The Very Thought of You’. Later discovering the skill and sublime tone of Ella Fitzgerald, Aoife spent time studying jazz at Newpark Music Centre in Dublin where she acquired invaluable knowledge and the inspiration to pursue a life of music and performance.

Aoife’s first album of original songs Clouds was released in 2017. This album was the culmination of extensive support from Music Network that included mentoring, artistic development, and touring. Along with her band, she was a featured guest on Carl Corcoran’s ‘Blue Of The Shortest Night’ on RTÉ Lyric FM in 2017 where they performed a set on live radio. Aoife has performed extensively in Ireland, playing many festivals, arts centres, and venues.

Aoife’s first album This Time The Dream’s On Me was released in 2013 and is a collection of her favourite songs from jazz standards to Bob Dylan. It was warmly received by radio and media alike.

Aoife was a finalist in the 2021 October Irish Music Month ‘Local Hero Song Competition’ in association with Hotpress, BAI, Ruby Works, IMRO and RAAP. Aoife has been the recipient of Arts Council Bursary Awards, an Agility Award, and a Professional Development Award from Music Network. She has also received awards from Clare Arts Office. Her unique, expressive voice is equally at home with soul, folk, blues or jazz and can evoke memories of the sophisticated, velvet tones of Ella Fitzgerald, the earthy, sweet lyricism of Patsy Cline or the straight-up country clarity of Alison Krauss.

‘Aoife Doyle combines the guts and vulnerability of a blues singer with the poise and musicianship of a well-schooled jazz artist.’ The Irish Times