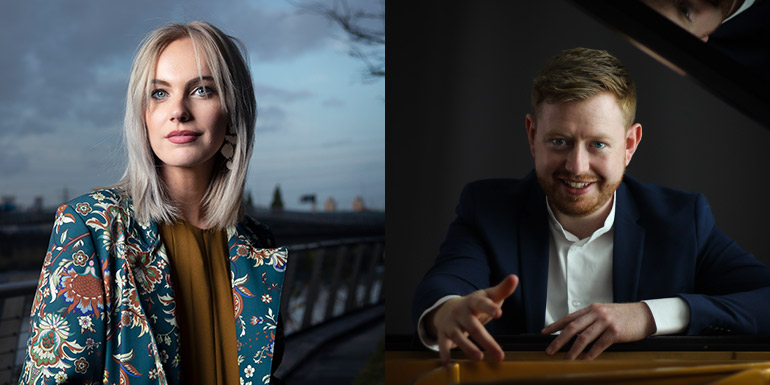 Niamh O’Sullivan and Gary Beecher’s programme for this concert will include a cycle of Schumann songs, as well as well-known favourites by Gershwin, Jerome Kern and Rodgers and Hammerstein.

Twenty-seven-year-old Irish mezzo-soprano Niamh O’Sullivan, praised for her “bewitchingly beautiful, dark vibrant voice” (Süddeutsche Zeitung), studied at the Royal Irish Academy of Music in Dublin under Veronica Dunne. She followed her studies by joining the Opera Studio at the Bayerische Staatsoper, Munich from 2016 to 2018.

Her numerous operatic engagements in Munich include Hänsel in Humperdinck’s Hänsel und Gretel, Kate Pinkerton Madama Butterfly, the Secretary in Menotti’s The Consul, Flora La Traviata and Barena Jenůfa. She also travelled with the company of the Bayerische Staatsoper for a concert performance of Der Rosenkavalier at Carnegie Hall, New York, conducted by Kirill Petrenko. Other appearances include her 2018 Irish National Opera debut as Tisbe La Cenerentola, Mercédès Carmen (also with INO), and in Cousser’s The Applause of Mount Parnassus at the Wigmore Hall with Ensemble Marsyas under the musical direction of Peter Whelan.

In concert, Niamh has performed Elgar’s Sea Pictures at the Prinzregententheater as part of the Munich Festspiele in July 2019 and has sang both Mozart’s Requiem and Handel’s Messiah with the Müncher Hofkantorei. She also performed the main role of ‘Cain’ in Scarlatti’s Oratorio Il Primo Omicidio with The Jakobsplatz Orchester conducted by Daniel Grossmann.

In the 2021-22 season, Niamh made her Royal Opera House debut on the Linbury stage as Asteria in Bajazet, a co-production between Irish National Opera and Covent Garden. She made further appearances with Irish National Opera in the world premiere production of The First Child by Donnacha Dennehy and her role debut as Mercédès in Carmen, before a house debut as Wellgunde in a new production of Das Rheingold at Opernhaus Zürich. Later in the season, she returns to Zurich for a role debut as Meg Page in Falstaff.

Next season, Niamh will return to Wexford to sing the role of Mirza in Felicien David’s Lalla Roukh and will also return to Irish National Opera to sing Charlotte in Massenet’s Werther on a tour around Ireland. In between these, Niamh will join The English Concert and conductor Harry Bicket for a US and European tour of Handel’s Solomon including venues such as Carnegie Hall, New York, The Barbican Centre, London, LA Opera, Los Angeles and more.

He was the winner of the Irish Freemasons Young Musician of the Year and has performed as soloist with both the RTÉ National Symphony Orchestra and RTÉ Concert Orchestra. Venues he has performed in include the Barbican and Wigmore Hall in London, the National Concert Hall and RDS in Dublin, University Concert Hall, Limerick, and Cork Opera House among others. Radio broadcasts include live performances on BBC Radio Three and RTÉ Lyric FM.

He completed his MA at the Guildhall School of Music and Drama in London where he was a Fellow and staff vocal coach accompanist, and was also mentored by Julius Drake and Charles Owen. He holds a BMus and MA from the CIT Cork School of Music, where he studied with Susan & Jan Čáp, Michael McHale and Gabriela Mayer; former teachers include Jacques Rouvier (Universität der Künste Berlin) and John O’Conor (RIAM).

Gary currently lives in Cork and is Assistant Lecturer of Piano and Contemporary Keyboards at the MTU Cork School of Music.