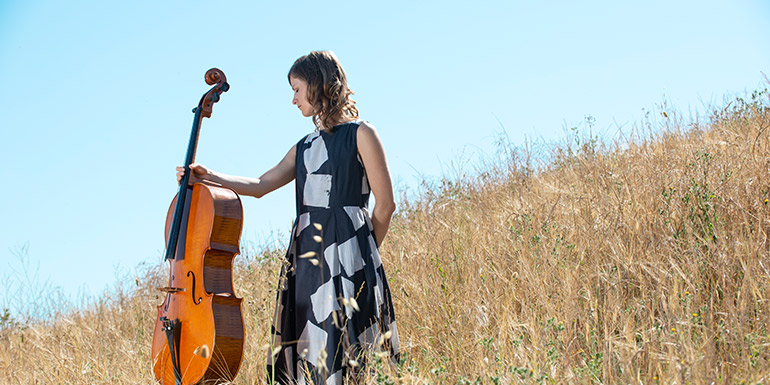 Free (but ticketed) as part of the RSA Fellows Festival

Free (but ticketed) as part of the RSA Fellows Festival
Tickets

Cellist and vocalist Naomi Berrill hails from Headford in County Galway, and is now based in Florence, Italy.

After graduating from the Royal Scottish Academy of Music and Drama, she continued her studies at the School of Music in Fiesole, Italy and at the Musik-Akademie of Basel, Switzerland. In 2010 Naomi founded High Notes, an annual summer music festival which takes place in the Apuane Alps.

Her first solo album, From the Ground (2015), consists of arrangements of Classical, jazz and Irish folk music for solo voice and cello. Her two subsequent albums bring focus to original music for voice and cello, developing the innovative and experimental techniques demonstrated on her first CD. Her second album, To the Sky, was released in November 2017 and her third album, Suite Dreams, was released in 2020 in collaboration with Warner Italy.

Naomi has performed her original music at the Biennale Danza in Venice, working in partnership with regular collaborator, choreographer Virgilio Sieni. She has also featured as a soloist at Spoleto Festival dei Due Mondi, Music for Galway’s Cellissimo Festival, Spike Cello Festival in Dublin, Cello Biënnale in Amsterdam, Trame Sonore Chamber Music Festival in Mantova and at the Uffizi Gallery in Florence. She has collaborated with Arvo Pärt, Bill Viola, Giovanni Sollima, Bill Whelan, Crash Ensemble, the Scottish Chamber Orchestra and New York City Ballet, among others.

Our popular Summertime Concert Series is back with 9 musicians performing across 6 dates.