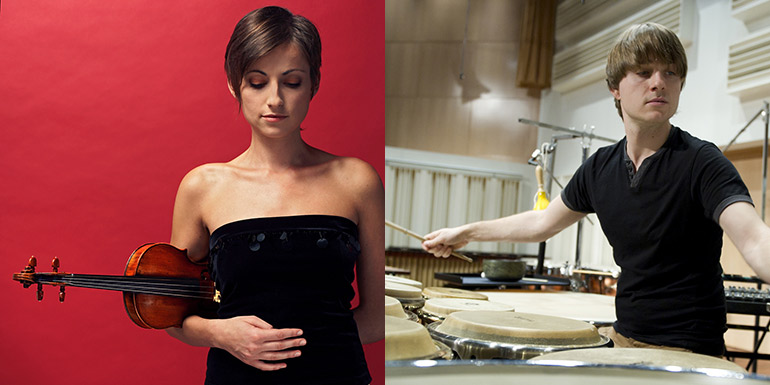 When it comes to musical talent, it’s fair to say that the old adage of the apple not falling far from the tree rings especially true. Sister and brother duo Ioana and Alex grew up in Cork with well-known Romanian musician parents, Adrian Petcu and Ruxandra Petcu-Colan. Even without lockdowns, music would have undoubtedly been a daily part of their learn-from-home agenda from their very earliest years.

Having clocked up an impressive solo performing career to date, Ioana lives in Bangor and is Associate Leader of the Ulster Orchestra. As a soloist, Ioana has performed many of the great concertos from Beethoven to Shostakovich, as well as more contemporary offerings from Philip Glass, John Tavener and Arvo Pärt. Her highly acclaimed recording of the Bruch Concerto with RTÉ Concert Orchestra is frequently aired on RTÉ Lyric fm.

Alex has stayed a bit closer to home in Cork, but has established himself both nationally and internationally as a percussionist of the finest calibre. While performing in a wide variety of settings with a multitude of orchestras, ensembles and groups, Alex’s main specialty lies in solo and chamber music. Recent soloist appearances include performances at the West Cork Chamber Music Festival and National Concert Hall as well as with both RTÉ orchestras and the Irish Chamber Orchestra.

At this lunchtime classical concert, expect impressive arrangements of works by composers including Telemann and Debussy alongside Piazzolla’s high-spirited Histoire du Tango. Like so many families around the country, the Petcus will have had to make do with being together-apart for many of the last few months. This concert promises to be a joyful reunion for performers and audience alike.