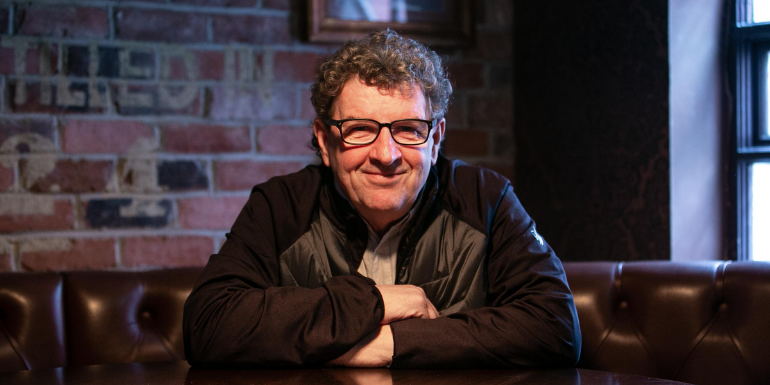 In 1977, Mike Hanrahan began his professional career with Maura O’Connell in a duo called TUMBLEWEED. In 1980 he joined Stockton’s Wing as guitarist, singer, and songwriter.

Mike wrote all songs on Stockton’s Wing’s groundbreaking and critically acclaimed album Light in the Western Sky (1984) including the hits ‘Beautiful Affair’ and ‘Walk Away’.

The Wing toured extensively around the world collaborating with many artists as they created a soundscape using differing genres, traditions and influences to create the inimitable sound that was and still is Stockton’s Wing.

In 1989 Sammy Davis Junior invited the band to perform at his Lansdowne Road shows in Dublin. In 1990 Stockton’s Wing went on location to take part in the Noel Pearson/Jim Sheridan film production of the John B. Keane play The Field which featured Oscar nominee Richard Harris and John Hurt.

Mike left Stockton’s Wing in 1994 to tour with Finbar Furey and pursue a solo career in Europe recording his first album for German label Wundertutte Someone Like You.

Ronnie Drew invited him to collaborate on his 1997 theatre show Ronnie I hardly knew Ya and they worked together until Ronnie’s death in 2008. Mike produced four albums for Ronnie, two with Eleanor Shanley which gave us the iconic duet ‘A Couple More Years’. The theatre show had two runs in Dublin and a successful Off Broadway run at The Irish Theatre. Mike was musical Director for the critically acclaimed theatre show Legends of Irish Music featuring Ronnie along with Liam Clancy, Finbar Furey, Johnny McAvoy, Jim McCann and Paddy Reilly.

Mike currently performs with a reunited Stockton’s Wing who signed with Universal records and released a back-catalogue collection in January 2020. The album, Beautiful Affair: A Stockton’s Wing Retrospective, went to number one in sales and download charts. A live album is due in October 2021.

He is back writing songs and has started recording his third solo album with friend and music producer Gavin Glass. He also writes and performs with Leslie Dowdall and Eleanor Shanley.

His theatre show Songs and Stories will roll out over the winter months and will feature many of his friends in music throughout the series.

A River Rolls On, inspired by his mum’s journey though dementia, was released in May 2021 featuring Mike, Lisa Lambe, Sandy Kelly and The Forgetmenots choir. All proceeds went to help develop creative projects for those living with memory loss.

A new single ‘Shine’ is due for release in September.