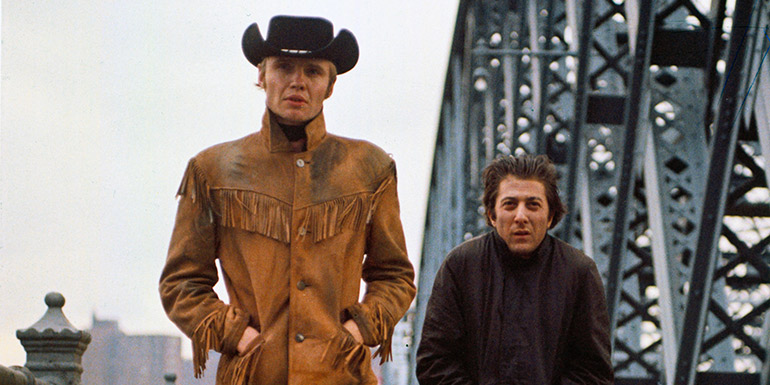 Now 50 years old, Midnight Cowboy remains an indelible part of film history, with iconography and references to the film still alive in pop culture. Set in the dying days of the 1960s, Midnight Cowboy is the story of the unlikely friendship between two young hustlers in the big city. Handsome but naïve Joe Buck (Jon Voight) quits his job as a dishwasher and relocates from small-town Texas to New York City, hoping to make his way as a male prostitute for wealthy women and enter a life of luxury. As he struggles to find clients & establish his place in the seedy underbelly of the city, he encounters the street-savvy but sickly conman Ratso Rizzo (Dustin Hoffman).

These two drifters form a business relationship and close bond, and come to rely on each other for survival in a cold and alienating urban jungle. This deeply affecting tale of loneliness, loyalty, and dreams delayed boasts two incredible performances from Voight and Hoffman. It was the first (and only) X-rated Best Picture winner at the Academy Awards in 1970, and also received Oscars for Best Director and Best Adapted Screenplay.

Please Note: this film contains a sequence of flashing lights which might affect customers who are susceptible to photosensitive epilepsy.