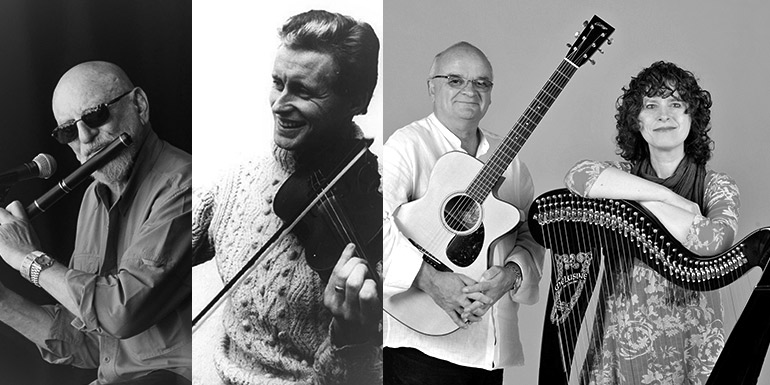 Matt Molloy was born in Co. Roscommon, into one of the long lines of flute players for which the area is famous. He learned flute and whistle from his father, was playing in the school fife and drum band at the age of eight and by eighteen had won first prize in the major traditional music competitions. He moved to Dublin in the early 1970s to work for the Irish national airline as an engineer. He started playing in the music scene where he first became acquainted with Paddy Moloney. Matt co-founded The Bothy Band with Donal Lunny, and they recorded four albums in as many years, all highly regarded to this day. In his own words: “We made great music and had a great time but financially we were a bit of a disaster. We had too much of a good time!”

Following the group’s demise, Matt joined the reformed Planxty before finally becoming a member of The Chieftains in 1979. In addition to his group work, Matt has featured on many other albums and was featured soloist with the Irish Chamber Orchestra on the centrepiece of composer Micheal O Suilleabháin’s album Oileán/Island.

Matt lives in Westport and has four children, Peter, Niamh, Clare and James, with his late wife, Geraldine. Matt also runs his famous pub, Matt Molloy’s, visited by many from far and wide, including Twiggy, Noel and Liam Gallagher, Jerry Garcia, to name but a few.

Dubliner Seán was surrounded by traditional Irish music from an early age. Both parents were traditional fiddlers and he began playing the fiddle at a young age. He attended Dublin School of Music where he received classical training, but soon became one of Ireland’s most talented young fiddlers, winning awards and such honours as the All-Ireland Championships and the Fiddler of Dooney competition, from which he earned the title of master fiddler.

A member of Ceoltóirí Cualann in the 1960s, Seán also performed with some of the trios and duets formed by Paddy Moloney in the 60s. It was 1968 before he joined The Chieftains on invitation from Paddy.

He has recorded a well-received solo album, Seán Keane and a duet album with fellow Chieftain Matt Molloy, Contentment is Wealth. He has also recorded with Mick Moloney and his brother, James Keane on the album Reel Away the Real World in 1980.
Sean lives in Dublin with his wife Marie, and they have three children and four grandchildren.

The celebrated virtuoso partnership of “the doyenne of Irish harpers” (SCOTLAND ON SUNDAY) and 2001 recipient of Irish music’s most prestigious award, Traditional Musician of the Year – Gradam Ceoil TG4 – and “one of the UK’s most staggering and influential acoustic guitarists” (fROOTS), has by now brought its special musical vision to venues large and small – from the tiniest of historic churches in England, Germany and Italy to palaces in Kyoto and Istanbul, London’s Barbican, Sydney Town Hall and the Philharmonie in Cologne – in twenty-two countries on five continents. Their performances – described by The Irish Times as “music of fire and brilliance from the high-wire act in traditional music” – are rooted but eclectic, emotional but adventurous: a breathtaking blend of traditional Irish music, hot jazz, bluegrass and baroque, coupled with striking new compositions and Chris’s delightfully subversive wit. They’ve made many appearances on TV and radio and their busy touring schedule has brought them to twenty-one countries on five continents. Of their sixth CD, FireWire, the critics said:

“Album of the Year” LIVE IRELAND

“One of the UK’s most staggering and influential acoustic guitarists” (fROOTS) in concert with “the doyenne of Irish harpers” (SCOTLAND ON SUNDAY) and 2001 recipient of the prestigious Irish Traditional Musician of the Year Award (Gradam Ceoil TG4).