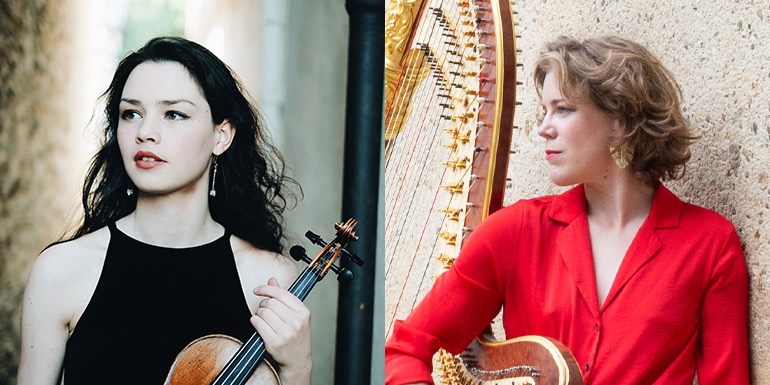 Like coffee and cake, fish and chips or Fred and Ginger, some pairings just can’t be topped. The exquisite combination of violin and harp is most definitely a match made in heaven, and no more so than in this new Music Network collaboration between Irish violinist Mairéad Hickey and French harpist Agnès Clément.

Celebrated for her captivating expression, soaring tone and fearless virtuosity, Mairéad Hickey’s natural ability to communicate sincerely, and with beauty and integrity has entranced audiences worldwide. Agnès Clément is recognised as a musician of exceptional talent whose astonishing virtuosity alongside an ability to deliver performances brimming with full-blooded passion has won her widespread acclaim.

Featuring a beautiful selection of music by Bach, Saint-Saëns, Massenet, Viardot, Renié, Spohr (the inventor of the violin chin rest no less!) and a brand new Music Network commission by John McLachlan, their programme will delight and enthral music lovers around the country.

Composer John McLachlan will present a Composer Insight Session during the final concert of the tour at Station House Theatre, Clifden, on 16 October.

Please note that Agnès Clément replaces Anaïs Gaudemard on this tour, in a change to the previously-advertised line-up.

“Hickey brought an amazing combination of gutsiness and ecstasy.” The Irish Times

As a soloist Mairéad has performed with the RTÉ Irish National Symphony Orchestra, the RTÉ Concert Orchestra, Württembergisches Kammerorchester, Philharmonisches Staatsorchester Mainz, Kremerata Baltica and Camerata Ireland and many others in some of the major halls around the world.  Her Carnegie Hall debut was described as ‘…magical, penetrating to the heart and soul of the music.’ (New York Epoch Times)

Her love of chamber music led her to co-found the Ortús Chamber Music Festival in 2016 in her native Cork, of which she is Artistic Director.

Born in 1996, Mairéad began playing the violin at the age of three with Jyrki Pietila. From 2003 to 2014 she studied with Adrian Petcu at the CIT Cork School of Music, Ireland and spent a year in France studying at the Conservatoire de Nantes with Constantin Serban. She is now studying with Mihaela Martin at Kronberg Academy, sponsored by the Hilmar Kopper Stipendium.

Highlights of her upcoming season include a performance in Wigmore Hall, London with Sir András Schiff and in Frankfurt with the HR-Sinfonie Orchester and Christoph Eschenbach.

Mairéad also plays traditional Irish music and has won eight world Irish fiddle titles. She has an instructional app ‘Irish Fiddler’ which is available on iTunes.

In 2019, Flemish composer Wim Hendreickx dedicated his new Harp Concertino to Agnès which she premiered in Brussels with La Monnaie Symphony Orchestra conducted by Alain Altinoglu. Passionate about increasing contemporary repertoire for the harp, she has also premièred new music by Olivier Massot, Toshio Hosokawa, Michael Maganuco and Krzysztof Meyer.