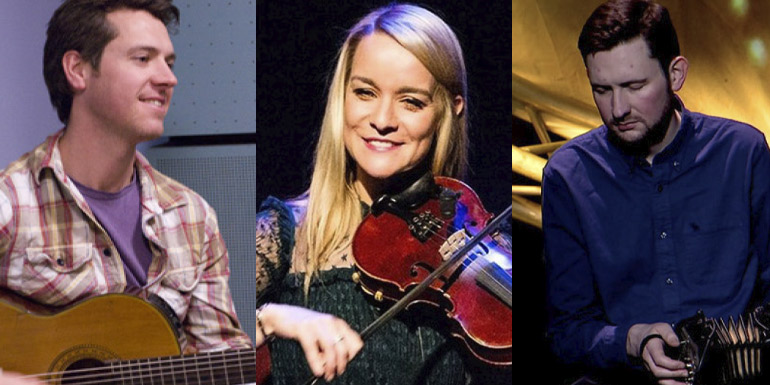 “Rynne and Breen have fabulous chemistry together and have found backing musicians who are more than mere accompanists but who are stakeholders in the game” – Dan Neely, The Irish Echo, New York

Nasc is the new album from Co. Clare musicians Tara Breen and Pádraig Rynne. The duo has been performing regularly since 2009 and had always planned on releasing a duet album. 2020 offered the perfect opportunity to enter the studio with long time collaborators Dónal Lunny and Jim Murray with Pádraig at the steering wheel on production. In December 2020 they travelled to Malbay studios in Midtown Malbay spending four days recording. What followed was a nine-track album of mostly Irish traditional music with a sprinkle of Scottish, Asturian and Breton melodies as well as self-composed pieces by Pádraig, Jim and Dónal.

“Nasc holds a raft of sparkling new tunes and judiciously chosen borrowings. Generous of spirit and wide-open arms, this is an album to savour, often and long” – Siobhan Long, The Irish Times

Embark on an odyssey of wonder, joyfulness and upbeat music as these incredibly talented and creative folk musicians shape melodies from past and present into something dynamic and irresistible. A group comprising musicians at the fore of our tradition, expect a performance from the gentle to the rhythmical and all the in-betweens.

Tara Breen has numerous All Ireland titles on the fiddle and tours regularly with The Chieftains, Stockton’s wing and as a solo performer. Pádraig Rynne is considered a leading figure in Irish music and is founding member of well-known bands such as NOTIFY, Atlantic Arc and Guidewires. Jim Murray and Pádraig have been long-time friends first meeting on the Galway scene when Jim began working with Sharon Shannon.

Described as “one of the freshest sounds in Irish music” by fRoots, Pádraig Rynne is a virtuoso musician, prolific composer and is regarded as the finest concertina player in Irish music today. With an MA in Music Technology and with a passion for experimenting in diverse genres, Pádraig is recognized for his refreshing explorations into the Irish tradition and for his ground-breaking band NOTIFY, described by the New York Echo as “cinematic in scope”.

A worthy description as “a musical wizard” by Music Network, Tara Breen is the fiddler with the legendary band The Chieftains. She is an all-round extraordinary musician who has 11 solo All-Ireland titles. Tara is also the winner of both the coveted Fiddler of Dooney and Michael Coleman Fiddle competitions and was invited to perform at Dublin Castle for the Queen of England during her State visit to Ireland. Tara has numerous recording credits to her name and regularly guests with artists such as Carlos Nunez, Stockton’s Wing and the Trí Tones.

Jim Murray has been touring the world full time as a professional musician since the age of eighteen. Jim is considered Sharon Shannon’s “right hand man” having recorded and toured with her over five continents.  He also released two critically acclaimed albums with long term partner Seamus Begley in 2001 and 2008 which collectively scooped many prestigious awards such as The Irish Times and Hot Press Traditional Irish Music Album of the Year. Since Jim’s arrival on the world stage, he has gained the respect of both national and international musicians and has performed and recorded with artists such as Sinead O’Connor, Steve Earl, Shane McGowan, Altan and Mary Black to mention but a few.