Gold.Berg.Werk | Triskel Arts Centre
We are committed to the Health & Safety of our staff and audiences. And we are operating under the agreed protocols described under "Guidance documents for the Safe Operations of Cinemas during COVID-19 Resilience and Recovery 2020-2021", a copy of which can be found here.
Live Music
Cinema
Visual Art
Festivals
Education
Special Events 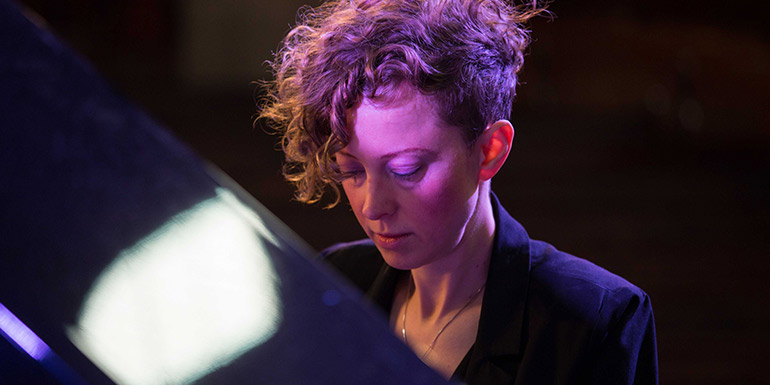 The Goldberg Variations is one of Bach’s most iconic compositions. On the surface it is a simply beautiful keyboard work based around a tranquil aria. Beneath lies a labyrinth of astonishing musical invention that has captivated musicians, composers and audiences for centuries.

Pioneering Austrian composer Karlheinz Essel’s Gold.Berg.Werk reimagines Bach’s music for piano and live electronics. Gorgeous time-stretched harmonies that quote and transform the original material, are manipulated in real time and played back on spatialised loudspeakers between the original piano variations.

Bringing together baroque and contemporary sounds, Gold.Berg.Werk transcends itself and becomes a new piece in its own right, creating a sense of space and distance unimaginable in Bach’s time. No two performances of this fascinating musical experience are ever the same.

This concert will celebrate the official launch of a new recording of this piece on the Ergodos label and there will be an opportunity to purchase a copy.

Described as “a powerhouse of contemporary keyboard repertoire” (Tempo), “stunning” (Wales Arts Review), “ravishing” (Pizzicato) and “remarkably sensuous” (New Zealand Herald) in the international press, pianist Xenia Pestova Bennett’s performances have earned her a reputation as a leading interpreter of uncompromising repertoire alongside masterpieces from the past. Xenia’s commitment to promoting music by living composers inspired her to commission dozens of new works and collaborate with major innovators in contemporary music. Her widely acclaimed recordings of core piano duo works of the Twentieth Century by John Cage and Karlheinz Stockhausen with Pascal Meyer are available on four CDs for Naxos Records. Her evocative solo debut of premiere recordings for the Innova label titled Shadow Piano was described as a “terrific album of dark, probing music” by the Chicago Reader.

Irish composer Ed Bennett was born in Bangor, Co. Down. His music, which has been described in the press as “anarchic” (The Irish Times), “manic” (Classical Music) and “thrilling” (Gramophone) is often characterised by its strong rhythmic energy, extreme contrasts and the combination of acoustic, electronic and multimedia elements. It was recently described in The Guardian as “unclassifiable, raw-nerve music of huge energy and imagination” and by Sinfini Music as “one of the most scintillating voices to emerge of late from the British Isles”. His body of work includes large-scale orchestral works, ensemble pieces, solo works, electronic music, opera, installations and works for dance and film. In 2019 he was awarded the Arts Council of Northern Ireland’s Major Individual Artist Award, the highest honour awarded to an artist from the region.

He performs with and directs his own ensemble, Decibel, which is dedicated to the performance of new and experimental cross-discipline work and with whom he has released three critically acclaimed CDs of his music. Dzama Stories (Quartz Music) was described as “a glorious addition to the contemporary canon…I haven’t heard a disc of Irish composition as vital and as urgent as this in a long while” (Musical Criticism, 5*) and My Broken Machines (NMC) was Time Out Chicago’s No.1 Contemporary CD of 2011. His most recent release Togetherness (2018) was described in a 5* review in Classical Music Magazine as “high-octane music that demands the listeners’ attention”.

Karlheinz Essl is an Austrian composer, performer, improviser, software developer, media artist and composition teacher. During his career, he has participated in various composer-in-residence programmes and international festivals. He was the music curator of the Essl Museum in Klosterneuburg and still teaches at acclaimed universities worldwide such as the University of Music and Performing Arts in Vienna, Harvard University, and many more. Besides writing instrumental music, he also works in the fields of electronic music, interactive real-time compositions and sound installations.

Read Xenia Pestova Bennett’s notes on Gold.Berg.Werk, written for her new recording of the work on the Ergodos label

The very idea of tackling J.S. Bach’s cornerstone of keyboard repertoire, the Goldberg Variations, places an enormous psychological “weight” of tradition on any keyboard player brave or foolish enough to do so. However, rather than presenting this work as a fixed artefact behind dusty museum glass or trying to match existing interpretations, I find that it helps to view it as a living and evolving organism.

Karlheinz Essl’s Gold.Berg.Werk (“gold mine work”), a new piece in its own right, takes the Bach as a point of departure and offers a fresh perspective. Essl respectfully incorporates stunning electronic interludes with a spatial dimension, moving sound between the piano and the audience. A small transducer is cleverly hidden inside the piano, using the resonant properties of the instrument to amplify the sound, which is also panned behind and above the audience through a distant “lontano” loudspeaker. While no recording can approach the intimate immediacy of a live performance, you will still get an idea of movement in our binaural version, recorded at the Sonic Arts Research Centre in Belfast during the difficult September of 2020. I like to think that Bach, ever the experimentalist with structure and textures, would approve.