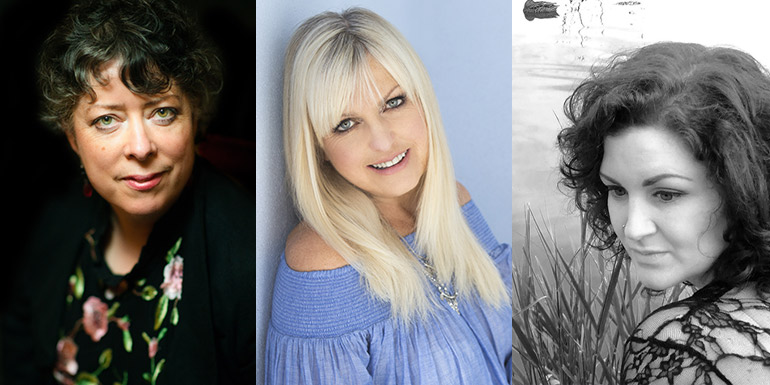 Mary Greene is one third of and principle songwriter for the trio Greenshine. Her songs feature regularly in the Top 3 on RTÉ Radio 1’s Airplay Chart with her song ‘The Girl In The Lavender Dress’ reaching No. 1 and going on to be the second most played Irish track on the station for the year of its release. In her writing, Mary loves to explore the magic running just under the surface of everyday life and to find what good she can in every situation. To that end, she could be described as a realistic optimist. Her songs have been covered by Seán Keane and Kate Purcell and her song ‘Meet Me In The Garden’ featured prominently in Carrie Crowley’s directorial debut short film Waterway. As well as on Greenshine’s recordings, her voice can be heard on the tracks of Christy Moore, John Spillane, Frances Black, Mick Hanley and many more.

“Greenshine have produced one great record after the next over the last couple of years,” – John Creedon, RTÉ Radio 1

Fiona Kennedy is a singer-songwriter, recording artist & IRMA Award nominee. Her latest single ‘Where Else Would You Get It’, produced by Declan Sinnott (Mary Black/Christy Moore) has just been released and is an evocative memory of fly fishing with her father. The Cork based performer has released a succession of tracks, with a previous single ‘Place of my Resurrection’ going straight to number one in the iTunes Chart this year. Fiona worked with another Irish music industry heavyweight, guitarist Bill Shanley (Ray Davies/Gilbert O’Sullivan) on her last album The Beach and is currently working on a new album due for release in early 2022. An artist with a long track record, Fiona performed in the very early days of the Cork Folk Festival, with shows in The Country Club and the Metropole Hotel and is thrilled to be back playing in this iconic Festival for 2021.

Anna Mitchell is a Cork=based singer and songwriter whose folky, country-soul tinged songs are drawn in by a unique, spine tingling voice. Anna has released two critically acclaimed solo albums, Down To The Bone (2014) and self-titled Anna Mitchell in (2018) and is also a part of the Some Rise Some Fall collective with releases in 2020.

“If David Lynch were to reset Blue Velvet in the wilds of West Cork, then Anna Mitchell’s evocative, dark songs of life and love’s painful kiss would sit well on the soundtrack.  ★ ★ ★ ★” – The Irish Times