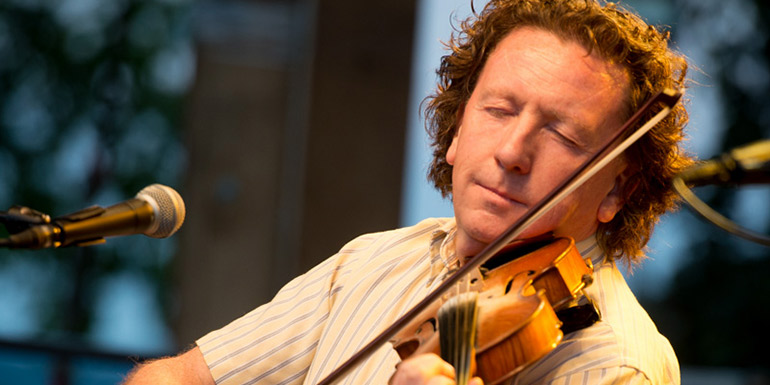 Frankie Gavin is one of the most renowned living Irish musicians. Though primarily known as a virtuoso fiddler and founder member of De Danann, he has composed several tunes. One in particular, ‘Alice’s Reel’, has entered the standard repertoire.

Frankie Gavin was born in 1956 in Corrandulla, Co. Galway. He comes from a musical family: his father, mother and family all played Irish Music. He started playing the tin whistle at age four, making his first T.V. appearance three years later. At the age of ten years old Frankie began to play fiddle and at the age of seventeen he placed first in the All Ireland Fiddle Competition and in the All Ireland Flute Competition, both on the same day.

Mainly learning by ear, he was strongly influenced by the 78 recordings of Michael Coleman and James Morrison. Sessions in the Cellar Bar, Galway and later in Hughes’ pub in Spiddal led to the formation of De Dannan in 1973.

He has recorded 16 albums with De Dannan as well as a number of solo albums, and three collaborations: one a tribute to Joe Cooley entitled ‘Omos do Joe Cooley’ with Paul Brock; a fine collaboration with fellow De Dannan member Alec Finn; and one with Stephane Grapelli exploring the languages of jazz and traditional music. He has also guested with The Rolling Stones on their Voodoo Lounge album, with Keith Richards on ‘Wingless Angels’ and with Earl Scruggs the great banjo man. (Irish Tune Composers website).

Frankie has featured at numerous Cork Folk Festivals along with wonderful musicians including Mary Black, Dolores Kean, Martin O’ Connor, Jackie Daly, Johnny ‘Ringo’ McDonagh and Charlie Piggott. His first visit was in 1979 with the celebrated group De Dannan and they returned five more times to Cork where the group were always were held in high esteem. He has also featured with the Frankie Gavin Quartet in 1993 and the Corner House Set with Alec Finn, Aiden Coffey and Colm Murphy in 2017.

The festival committee would like to wish Frankie a speedy recovery from his major health condition. Here’s to you Frankie, you’re a true genius, our maestro.