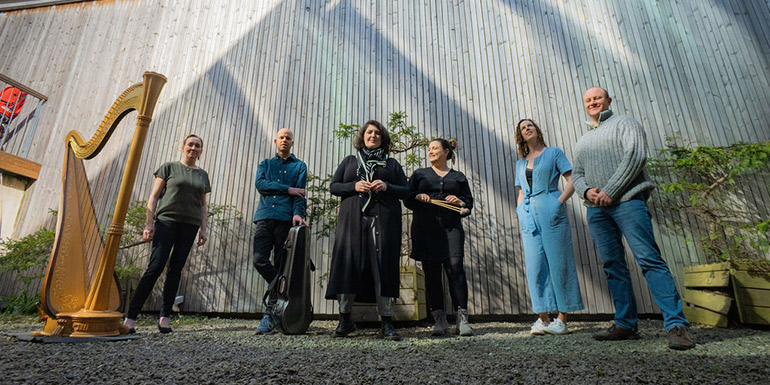 Curated by Nathan Sherman, violist and artistic director of  Ficino Ensemble, this album presents a richly varied kaleidoscope of human emotions and musical colours; it is a celebration of musical pluralism. The music here is by turns optimistic, imploring, droll, and desolate; the soundworlds range from full and driving, to spare and poignant, to intimate and timeless. Vocalist Michelle O’Rourke and the musicians of Ficino Ensemble offer deeply committed performances, conjuring a unique atmosphere for each song.

“What exactly is a folk song?” asks Sherman. “Is it the tune, or is it the words? Is it a style or a feeling?” Ultimately, for him, folk music feels like “a way of glimpsing into the past and finding our connection with it”. “This is how we make sense of ourselves and our society,” he continues. “This record is a testament to the most human instincts: to see, to reflect and to be moved.” Sherman quotes the American folklorist George Herzog (1901-1983): “The creative process […] is spread over many individuals and generations, and it never comes to an end as long as the tradition is alive.”

Formed in 2013 by artistic director and violist Nathan Sherman, Ficino Ensemble is an acclaimed chamber music group known for programming a breadth of musical styles. Their concerts have been described as “distinctive, transparent and carefully poised”. They have been invited to perform at major festivals and concert series in Ireland, including the String Quartet Series at the National Concert Hall, and are frequently broadcasted on RTÉ Lyric FM. Each member of the ensemble is a major force on the Irish classical and contemporary music scene and enjoys devoting time to curated chamber music programmes. Ficino Ensemble released their debut album, Winter, in 2018, and this was long listed for the RTÉ Choice Music Prize. Ficino Ensemble have premiered many works, and the ensemble is committed to championing music by living composers. ficinoensemble.com

Michelle O’Rourke is a singer based in Dublin, Ireland. Michelle’s natural sound, unaffected expressivity, and technical ability make for an interpreter of rare dynamism. Several Irish composers have created work specially for her, including Andrew Hamilton, Simon O’Connor, Karen Power, Judith Ring, Anna Murray, Benedict Schlepper-Connolly, and Garrett Sholdice. Michelle has featured on several critically acclaimed releases, including Left Behind: Songs of the 1916 Widows with Simon O’Connor (Ergodos) and Andrew Hamilton: Music for People with Crash Ensemble (NMC). Michelle can be heard contributing to Inside Out, the recent release by Dutch violinist Diamanda La Berge Dramm (Genuin). michelleorourke.ie