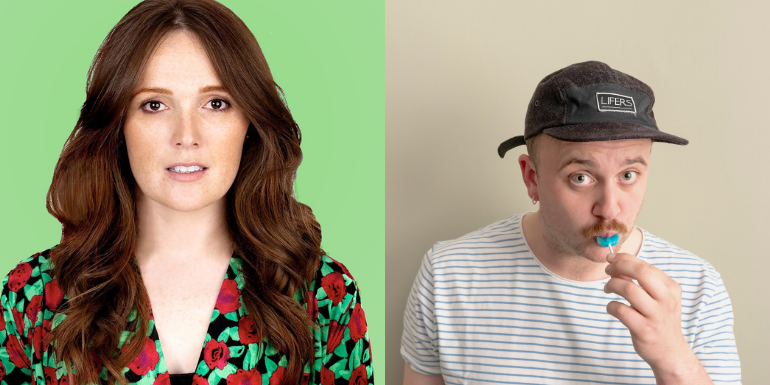 Join Emma Doran and Shane Daniel Byrne for some laughs during their two performances on Friday 13 August: 6.30pm & 8.30pm.

Emma Doran
One of Ireland’s most exciting emerging talents, Emma Doran is a comedian, blogger and self-proclaimed chancer. Her stand-up and sketches have racked up hundreds of thousands of hits on some of the country’s most popular sites including independent.ie, her.ie, and Irish Mirror. Emma has appeared on everything from the Today Show with Daithi and Maura to American TV show Right This Minute.
Emma can also be heard on FM104 breakfast show The Strawberry Alarm in their hilarious sketches with Jim Jim and co. Dry and sarcastic, she firmly has her finger on the pulse of society and is wickedly funny.

Shane Daniel Byrne
Shane Daniel Byrne is a writer, actor, MC and award winning stand-up comedian. After a decade working as an actor and theatre maker, he tried his hand at stand-up and hasn’t looked back since. He has performed at clubs all over Dublin as well as major festivals including Vodafone Comedy Festival, The Cat Laughs and Love Sensation. At Cat Laughs 2019 he was named ‘The Rockies Champion’. In the same year he took second place in the prestigious and world famous ‘So You Think You’re Funny’ competition at The Gilded Balloon at Edinburgh Fringe Festival. He has gained a following of nearly 30,000 people on Instagram with his sketches being viewed over a million times in 2020 alone. He has appeared on RTÉ & Virgin Media TV.