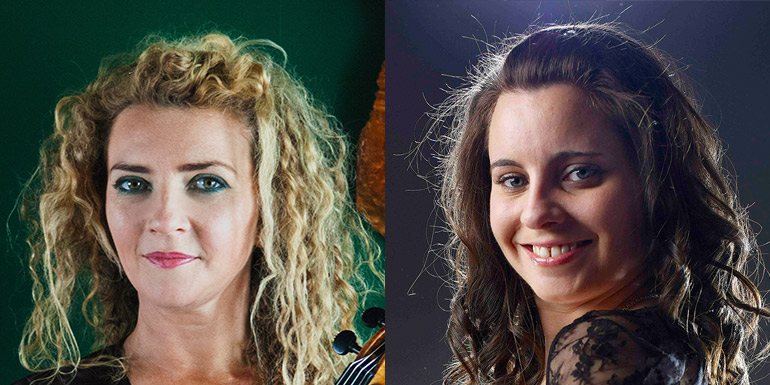 The programme for this recital given by Elizabeth Cooney and Ciara Moroney focuses on 1930s Paris, where both Stravinsky and Poulenc lived. Poulenc was influenced by Stravinsky’s work and composed the impactful Sonata for Violin and Piano in tribute to his friend, the renowned Spanish poet Lorca who was killed in the Spanish Civil War. Lorca was also a keen guitarist and composed these Spanish songs for voice and guitar, which are also very effective for violin and piano.

Elizabeth Cooney grew up in Cork and started learning the violin aged 5 with Patricia Kelleher through the Suzuki Method. She was inspired by meeting Dr Shinichi Suzuki when he visited Cork in 1985, and by having fun playing in groups and by memory. She continued her studies with Adrian Petcu at the Cork School of Music, before going on to the Royal College of Music in London, studying on a scholarship with Itzhak Rashkovsky.

Elizabeth is laureate of numerous prizes and competitions including the Martin Musical Fund, the Maisie Lewis Prize, the Ian Stoutzker Award for Violin and the Sion-Valais International Competition for Violin, Switzerland. She has performed as soloist with the National Symphony Orchestra, the RTÉ Concert Orchestra and the Ulster Orchestra, recorded for RTÉ Lyric FM and RTÉ TV and performed at the West Cork Chamber Music Festival. She has performed new works by Greg Caffrey, Gráinne Mulvey, Huw Watkins, Valentin Silvestrov, Alexander Knaifel, Sam Perkin and Aleksandra Vrebalov, among others.

She plays frequently with the English Chamber Orchestra and the dynamic Aurora Orchestra, touring to the USA, Mexico, Australia and Europe, as well as frequently appearing at the BBC Proms in the Royal Albert Hall. She has performed at the Wigmore and Royal Festival Halls in London and at the Weill Recital Hall, Carnegie Hall in New York as a chamber musician. She was recently broadcast live on BBC Radio 3, performing a piece by UK composer Hannah Conway. Now based in the UK, Elizabeth is Director of the Farnham Chamber Music Festival.

Irish pianist Ciara Moroney performs throughout Ireland and the UK, specialising in duo playing, chamber music and accompaniment. She is a lecturer in piano and coach-accompaniment at the MTU Cork School of Music. Ciara has a Postgraduate Diploma in Accompaniment from the Royal Academy of Music, where she studied with Andrew West, Michael Dussek and Colin Stone. During her studies there she won the Scott Huxley Prize for Piano Accompaniment and the Douglas Cameron Prize for duo playing. She also participated in the prestigious Song Circle concert series. She has worked as a trainee repetiteur at the Cardiff International Academy of Voice.

Ciara began her studies in her native Cork and completed her BMus and MA degrees at the Cork School of Music, where her principal piano teacher was Jan Čàp. During this time, she won many competitions, most notably the Yamaha Piano Scholarship in 2002. Ciara has appeared as soloist with the Cork School of Music Symphony and Chamber Orchestras, Cork Symphony Orchestra, Wexford Sinfonia and the Kilkenny Youth Orchestra. She has performed at the West Cork Chamber Music Festival and in concerts with the Irish Youth Choir and the Cork Children’s Chorus, with whom she undertook a tour of Japan in July 2006. Ciara has taken part in concerts at the Cork School of Music; Aula Maxima, UCC; Crawford Art Gallery; Cork City Hall; National Concert Hall, Dublin; St. Martin-in-the-Fields; Purcell Room; St. James’ Church, Piccadilly; and the Liverpool Philharmonic Hall among many other venues. Ciara has performed with Irish Heritage on several occasions in venues such as St. John’s Smith Square, the Actor’s Church, Covent Garden and the Royal Overseas League.