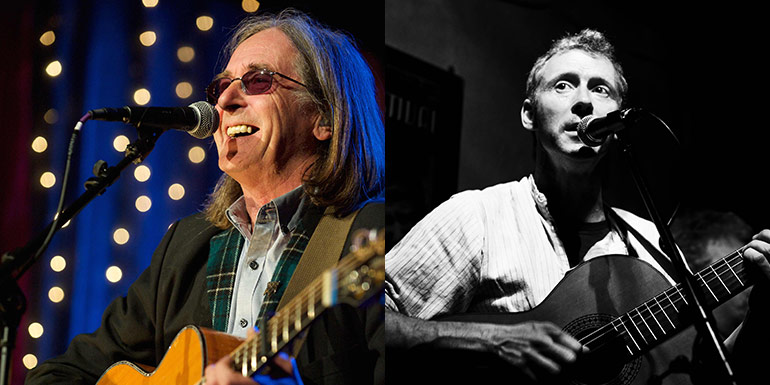 Dougie MacLean has built an international reputation as songwriter, composer of the song ‘Caledonia’ and extraordinary performer on his own terms. This talent has taken his performance to concerts and festivals all over the world and to the stages of Carnegie Hall in New York, London’s Festival Theatre and the Sydney Opera House. Other appearances of note include sharing the stage with Lou Reed and Eddi Reader in the grounds of Culzean Castle at the Burns and A’ That festival, featuring on the BBC Hogmanay programme from Edinburgh Castle with James Taylor, and sharing the bill with the legendary Mavis Staples at Glasgow‘s Royal Concert Hall.

His songs have been covered by a host of artists including Scottish stars Paolo Nutini & Amy MacDonald, Irish greats Ronan Keating, Mary & Frances Black, Dolores Keane, Deanta and Cara Dillon, and Grammy-award-winning US country singer Kathy Mattea. His anthem ‘Caledonia’ has topped the Scottish charts and become one of Scotland’s most popular contemporary songs. He wrote ‘Caledonia’, a modern Scottish folk ballad, in 1977. Caledonia is a Latin word for Scotland: the chorus of the song features the lyric “Caledonia, you’re calling me, and now I’m going home”. The song became the most popular of all MacLean’s recordings and something of an anthem for Scotland. ‘Caledonia’ has been covered by a great number of artists including Dolores Keane.

MacLean’s music has been used in Hollywood films including Last of the Mohicans, BBC’s TV Drama A Mug’s Game and he has been the subject of three BBC TV Specials, The Land – Songs of Dougie MacLean, Song Roads and Clann na Mara – Children of the Sea.

Dougie was awarded an OBE in the New Year’s Honours list in recognition of his services to music and charity. He has also recently received two prestigious Tartan Cleff Awards, a Lifetime Achievement Award by the BBC and been inducted into the Scottish Music Hall of Fame.

“Strong yet subtle, hauntingly evocative yet contemporary in feel, this music demands listening to over and over again.” Time Out, UK

“…a Scottish phenomenon… with his exquisite guitar style, expressive voice and honest performance, his songs conjure up remarkably vivid imagery of our world.” The Performing Songwriter, USA

Ger Wolfe is a modern-day troubadour, a singer, a songwriter and a poet who weaves beautiful melody around his word and rhyme, always delivered with a gorgeous voice and that totally unique finger-picking guitar style.

He specialises in crafting songs that will make you wonder in awe at the beauty and the sadness of Life in almost equal measure, yet always tipping the balance towards an overpowering sense of Hope and Joy.

He has toured extensively in Ireland and in the UK, both as a solo artist and with various combinations of his band, The New Skylarks, over the last twenty years.

Ger has released eight full albums worth of his own songs. The latest, Ger Wolfe & The New Skylark’s Melody Bright & The Favourite Sparrow, is a compilation of work from some of the previous CDs and a new song in his latest single ‘Love is in the Lost and Found’.

As popular as ever on national radio, Ger’s song ‘The Curra Road’ has found its way into the hearts of many singers and listeners alike but this new album promises to show people the wide variety of his work with The New Skylarks that might have slipped under the radar.

Ger’s newest CD is Ger Wolfe and The New Skylark’s Melody Bright and The Favourite Sparrow and was launched earlier this year.