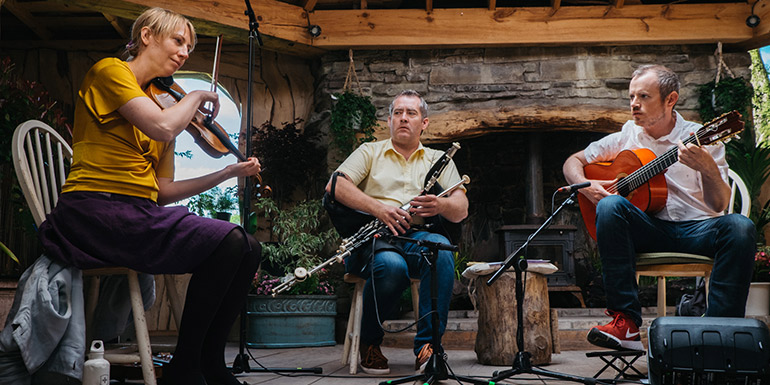 Uilleann piper David Power first met Finnish baroque violinist Marja Gaynor in 2016 when he worked with baroque group Camerata Kilkenny (of which she is a member) to investigate combining music on the uilleann pipes with the baroque folk tradition. The collaboration led to the well-received The Piper and the Faerie Queen on the RTÉ lyric fm label.

On 4 March 2020, just days before the first lockdown was announced, Marja and David were performing at the Kaleidoscope Series in Dublin, where they met flamenco guitarist John Walsh. Stunned by his virtuosity and musicianship, David subsequently approached John with a view to doing some exploratory work together, and in challenging rehearsal circumstances, the three met multiple times over lockdown to rehearse, leading to four online performances, including An Samhradh ag Teacht in April 2021 to celebrate the 10th Anniversary of Triskel Christchurch.

The Music Network RESONATE music residency was established to enable musicians to devote time to the creation of new work and to facilitate new creative partnerships. And so, David, Marja and John have spent time researching a range of pieces of music from the Irish folk tradition, the baroque folk tradition and the flamenco folk tradition to be worked on and developed so that they make sense for uilleann pipes, violin and guitar.

This is a labour-intensive process, with many ideas and suggestions, sometimes leading down blind alleys and invariably not every initially interesting piece or idea ends up making the cut. Typically, they might spend a whole day working on just one piece, and subsequently revisit the arrangement after finding out that some element didn’t quite work in performance.

Triskel are honoured to be able to give this time and space to musicians to develop their craft, to work on new music and we are especially happy to host a concert of the finished work. David, Marja and John are looking forward to test-driving their new material with a live audience!

John Walsh is Ireland’s leading Flamenco Guitarist. An accomplished musician and composer, John has been performing solo since 2006. He was one of ten musicians (and the only guitarist) chosen for the 2009 ‘Musicians of the Future’ concert in the National Concert Hall, Dublin, performing two of his original compositions. In 2015 he was invited to play at the second International Paco de Lucia Guitar festival in Algeciras, a major flamenco festival. John has composed music for and performed with the National Ballet of Ireland, Bill Whelan’s Riverdance and Michael Rooney’s De Cuellar Orchestra and performed for President of Ireland / Uachtarán na hÉireann Michael D. Higgins. He recently released his debut solo album ‘Irlandalucia’ to critical acclaim.