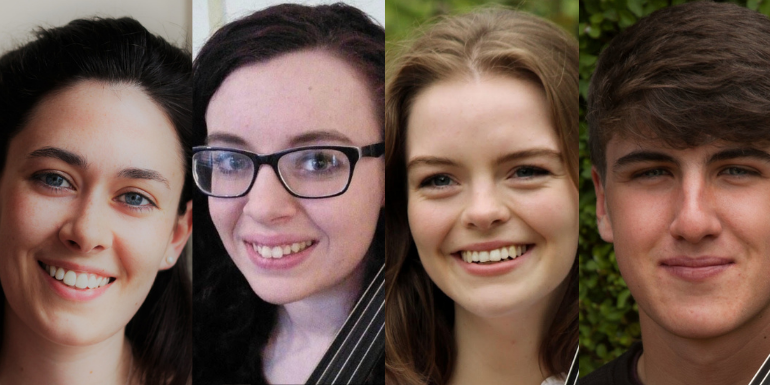 Join the Cork Cello Quartet for arrangements of popular favourites by Gershwin, Shostakovich, Popper and more.

Selected by The Arts Council as a recipient of a Next Generation Artist Bursary 2020, Aoife Burke’s numerous national prizes and awards include the RTÉ Lyric FM Award, Hazel de Courcy Lewis Cup, Bach Prize and Clyde Twelvetrees Cup at Feis Ceoil, Dublin and the Capuchin Order Perpetual Cup and Bursary at Feis Maitiú, Cork. A native of Cork, Aoife studied at undergraduate level with Emma Ferrand at the Royal Northern College of Music in Manchester, graduating in 2014 with a first-class honours Bachelor of Music degree and an LRSM Diploma in Performance with Distinction. For her third year, she undertook an Erasmus study exchange to the Folkwang Universität der Künste in Essen, Germany, where she joined the cello class of Christoph Richter and the chamber music class of Andreas Reiner. During the course of her studies, Aoife won the Raphael Sommer Music Scholarship and partook in the Britten-Pears Young Artist Programme. She has participated in masterclasses with such renowned cellists as Raphael Wallfisch, Ralph Kirshbaum, Miklós Perényi and Frans Helmerson. Aoife obtained a Master’s Degree in Arts with Distinction from the CIT Cork School of Music, where she studied under Christopher Marwood, and subsequently studied on the Performance Certificate Course at the Scuola di Musica di Fiesole, Italy, with Paolo Bonomini and Francesco Dillon.
An avid chamber musician, Aoife has collaborated with The Vanbrugh, the ConTempo String Quartet, Musici Ireland and the Gavin Bryars, Kirkos, Ficino and Crash Ensembles, and has performed at numerous national and international music festivals, including the NCH Chamber Music Gathering, the NCH Perspectives Series, West Cork Chamber Music Festival (where she recorded for RTÉ Lyric FM), Music in Drumcliffe, New Music Dublin, Cork Midsummer Festival, the RNCM Chamber Music Festival, Cantiere Internazionale d’Arte di Montepulciano, the Aurora Chamber Music Festival (Sweden) and Barry Douglas’ Clandeboye Festival, where she was awarded the Special Festival Prize.
Aoife is grateful for the generous support of the EMI Music Sound Foundation, The Arts Council and Music Network’s Music Capital Scheme, funded by The Department of Culture, Heritage and the Gaeltacht. Music Network is funded by The Arts Council.

Grace Coughlan is a fourth year BMus student at MTU Cork School of Music studying cello with Christopher Marwood. She has studied with Claes Gunnarsson at the Academy of Music and Drama in Gothenburg through the Erasmus exchange programme. She has won numerous national prizes, including Feis Maitiú’s advanced recital and cello concerto competitions, Feis Ceoil’s senior cello and the CSM senior recital. She was a finalist in the National Concert Hall “Young Musician’s Award” for strings 2015 and was selected to perform at Feis Ceoil’s Young Platform series at the National Concert Hall (2014, 2018 and 2019). Grace has participated in projects with the National Concert Hall and the Irish Chamber Orchestra including the Academos Project (2018). She has performed in masterclasses with Natalie Clein, Hannah Roberts, Maria Kliegel and Daniel Muller-Schott.
Grace was a member of the Doolan String Quartet, winner of both the Feis Ceoil Chamber Music Cup and the CSM Vanbrugh Chamber Music Competition in 2018. The quartet performed at the National Concert Hall Feis Ceoil Gala Concert and at the RDS Rising Stars series. They also participated in the West Cork Chamber Music Festival in Bantry in 2018 and 2019. Grace was a member of the National Youth Orchestra of Ireland and the Swedish National Orchestral Academy. Grace currently serves as principal cellist of the CSM Symphony Orchestra.

21 year old Zoë Nagle is currently pursuing her Bachelor’s degree at the Hochschule für Musik und Theater Munich, Germany, in the class of Julian Steckel. She completed her part-time musical studies at MTU Cork School of Music in 2019, where she was a student of Christopher Marwood. In 2016, she spent two months studying with Professor Gotthard Popp at the Robert Schumann Hochschule für Musik in Düsseldorf.
Zoë made her US debut in 2017, performing Tchaikovsky’s Variations on a Rococo Theme with the New York Concerti Sinfonietta in Carnegie Hall, New York. She performed Elgar’s Cello Concerto with the MTU Cork School of Music Symphony Orchestra in November 2019. Other notable recent performances include a performance as the Rising Star at the Killaloe Music Festival in June 2021, a performance of Poulenc’s Sonata for Cello and Piano at the National Concert Hall, a solo performance in the Kevin Barry Room, NCH, as part of the Inaugural NCH International Master Course and a performance in the ‘Young Musicians of the Future’ concert at the Clandeboye Festival.
Zoë also has a great love for chamber music, and performed in the National String Quartet Foundation’s 2020 Chamber Music Gathering at the National Concert Hall. She has participated in the masterclass programme at both the 2018 and 2019 West Cork Chamber Music Festivals, receiving tuition from members of the Vanbrugh, Danel, Apollon Musagète and Chiaroscuro quartets, as well as performers including Alina Ibragimova, Kirill Troussov, Maxim Rysanov, Liana Gourdjia and Andreas Reiner.

Callum Owens is currently a student of Nicolas Alstaedt at Hochschule für Musik Hanns Eisler Berlin. Prior to this he was a student of Christopher Marwood at CIT Cork School of Music, Ireland.
In 2017, he was awarded the National Concert Hall Award for Young String Musicians (2017-2019). In January 2020, he won the Senior Concerto Competition at Cork School of Music for his performance of Dvorak’s Cello Concerto in B minor. In 2018, at ESB Feis Ceoil, he won the Clyde Twelvetrees Trophy, achieving a score of 100% for his performance of Shostakovich Cello Concerto No 1.
In October 2019, he participated in Lac Léman Music Masterclasses with Frans Helmerson. He was selected to participate in Camerata Ireland Academy at the 2017, 2018 and 2019 Clandeboye Festivals. He has also participated in masterclasses with Daniel Müller-Schott, Andrés Díaz, Mischa Maisky, Marc Coppey and Hannah Roberts.
In 2018, he was selected to participate in Verbier Festival Junior Orchestra in Switzerland and was invited back to the orchestra for July 2019 session. He was a member of the National Youth Orchestra of Ireland from 2015 to 2018.
Callum is supported by Music Network’s Music Capital Scheme, funded by The Department of Culture, Heritage and the Gaeltacht. Music Network is funded by The Arts Council.