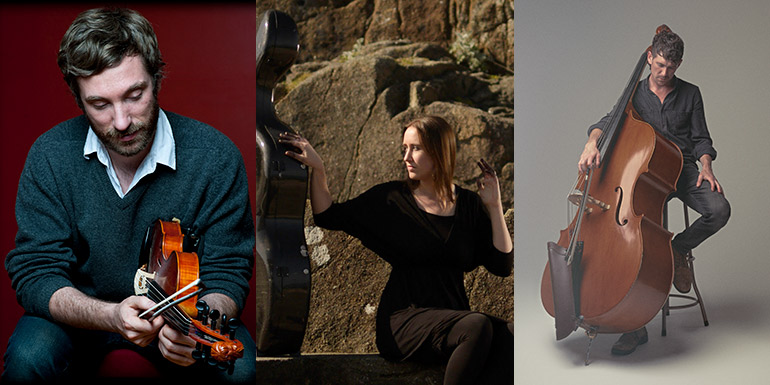 Caoimhín Ó Raghallaigh makes music on a 10-string fiddle called the hardanger d’amore. He has performed on some of the most beautiful stages in the world, including the Sydney Opera House, the Royal Albert Hall and the Carnegie Hall. He has made eighteen recordings to date, ranging from quite traditional to fairly out there, and continues to explore the region where traditional music begins to disintegrate.

Caoimhín performs as a solo artist, yet is also widely known through his collaborative work, including groups The Gloaming and This is How we Fly, and duos with Dan Trueman, Thomas Bartlett, Garth Knox, Mick O’Brien and Brendan Begley. He has also performed with artists such as Laurie Anderson, Vincent Moon and Amiina.

He has made music for theatre and film, including music for the Oscar-nominated movie Brooklyn and Volker Schlondorff’s Return to Montauk.

“the most imaginative and fascinating musician in all of trad” – Earle Hitchner, Irish Echo, USA

“the most singular traditional Irish musician of [his] generation” – State Magazine, Ireland


Cellist Kate Ellis is dedicated to the performance and exploration of all things with the shiny label of new music. Kate is the Artistic Director of Crash Ensemble, and is often seen playing with the musicians of Yurodny, TRE trio and Fovea Hex.

Kate is currently writing music with UK based musician Laura Cannell as part of a year long project releasing music monthly alongside bespoke film as a creative documentation of  2021. This project is supported by the Arts Council of England. Kate is the recent repient of residencies at the Martello Tower, Jaywick, UK and at the Cultural Centre Irlandais, France 2020/21.

As an arranger, he has arranged for the RTÉ Concert Orchestra, 2FM, & Crash Ensemble. He is the songwriter of chamber folk group Sun Collective. Their most recent EP described by Folk Radio UK as, “Discovering this EP is like discovering you actually breathe. You simply can’t live without it.”

He released his first solo Double Bass EP, ‘String Ogham Live’, in 2020 featuring work from four Irish composers. He is currently premiering new commissions in rural locations throughout Ireland, as part of his project, “We Used to Play Here”, with cellist Kate Ellis, in a custom made outdoor venue, transported on top of his Fiesta. He recorded with Damon Albarn (Blur, Gorillaz) in 2020 and is due to tour his show, ‘The Nearer The Fountain, More Pure The Stream Flows’ in 2022, alongside tours with David Longstreth’s (Dirty Projectors’) new commission for s t a r g a z e, ‘Song of the Earth in Crisis’ and Teach Damhsa’s show, MÁM, throughout Europe this year.

He is currently the Musical Director for the Saturday night music show ‘The Heart of Saturday Night’ on RTÉ One & is currently composing a new work for Harp & Cello commissioned by the Black Gate Cultural Centre, Galway.

Quiet Lights is a unique festival celebrating all that is traditional and folk music in Ireland. This year, as part of the festival, we’re welcoming Caoimhin O’Raghallaigh, Kate Ellis & Caimin Gilmore on Friday 19 November, and multi-instrumentalist Cormac McCarthy with Irish sean-nós singer Nell Ní Chróinín on Saturday 20 November.
See more »