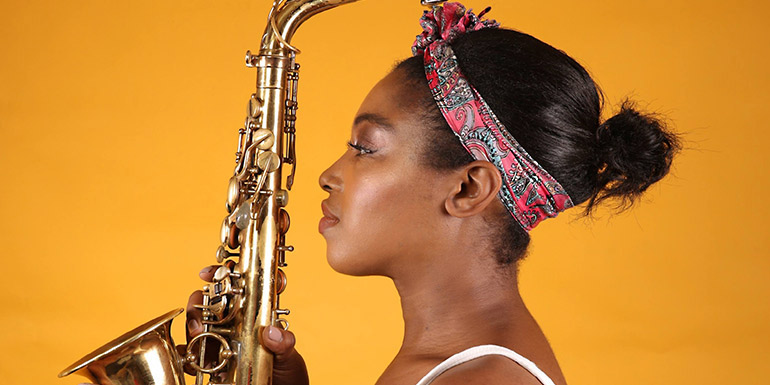 This explosive London-based band led by award-winning Nigerian born saxophonist Camilla George features many of the leading lights of the UK Jazz Scene.

Camilla’s love of fusing African and Western music has made her a unique voice on the international jazz circuit. She will be bringing her all-star band to Ireland for an unmissable 10-date tour mixing her hypnotic blend of afrofuturism, hip hop and jazz. She will be joined by Renato Paris (keys and vocals), Jihad Darwish (electric and double bass) and Rod Youngs (drums). Expect jazz grooves and afrobeat fusions. One not to be missed!

Camilla George, MOBO-nominated saxophonist and star of acclaimed group Jazz Jamaica, is regarded as one of the leading lights of British Jazz. A celebration of the jazz tradition, from its African roots through to its modern forms her music is an exciting and energetic blend of African, Caribbean and modern jazz influences.

Born in Eket, Nigeria, Camilla was interested in music from an early age and grew up listening to Fela Kuti alongside Jackie McLean and Charlie Parker. She began playing the saxophone at just 11 years old when she won a music competition where the prize was saxophone lessons.

In 2009 Camilla joined award winning band, Jazz Jamaica and in 2013 they were nominated for a MOBO award for Jazz Performance. She became a member of Courtney Pine’s Venus Warriors, an all-female group, in 2014 and in the same year founded her own ensemble the CGQ (Camilla George Quartet) showcasing some of London’s finest young players. After successfully releasing their EP, Lunacity in 2014, Camilla signed to Ubuntu Music in January 2017.

Dubbed “The Golden Girl of Jazz” by The Evening Standard, Camilla’s debut album, Isang (pronounced E-SANG which means journey in Ibibio, her native language) received huge critical acclaim. The ensemble’s follow up album, The People Could Fly was released in 2018 and featured special guest Omar as well as superb guitarist Shirley Tetteh. The album received impressive 4-star reviews from the Financial Times and Jazzwise and has appeared on key playlists such as State of Jazz and Tidal’s British Jazz playlist. Camilla recently received the Momentum Award (PPL) in support of her third studio album, Ibio Ibio which is a tribute to her tribe, the Ibibio people of South Eastern Coastal Nigeria.

Camilla has studied with many jazz greats such as saxophone giant, Jean Toussaint (of Art Blakey fame), Julian Siegal and Martin Speake at Trinity College of Music where she gained a Masters in Jazz Performance. In 2011, she was awarded The Archer Scholarship for Outstanding Performance.

The great sounds of soul, pop, R&B, jazz and funk merge together creating the signature sound of Renato Paris. A BRIT School graduate, flourishing artist and a regular on the vibrant young London jazz scene, music has taken Renato all over the world honing his craft on the road. He has worked with an array of artists, including Julian Joseph, Burt Bacharach, Jorja Smith, Nicola Piovani and Carleen Anderson to name a few. His passion for the art of song and improvisation knows no bounds. As well as leading his own band, he is a key member of two-time MOBO award-winner Moses Boyd’s Exodus band, and regularly leads the popular straight pocket jam at Pure Vinyl Records in Brixton, having founded the world-renowned weekly sessions. Renato has been featured at: Grammy Camp L.A., BBC Radio 1, BBC1Xtra, BBC Radio 3, Worldwide FM, JazzFM Awards, BBC Proms, BBC Maida Vale Live Sessions, Ronnie Scotts, NPR Tiny Desk & on London’s West End.

London based Rod Youngs is a composer and educator whose percussive skills personify diversity, authenticity, and distinctiveness. A native of Washington D.C., he was selected to study post-graduate jazz performance at the Eastman School of Music in Rochester, NY, under the tutelage of Keith Copeland. Rod’s consummate musicianship has garnered him a wide variety of work from concerts to recording sessions for radio, TV and film. He has recorded and performed with a formidable array of artists including Hugh Masekela, Lee Konitz, John Hendricks, Sia, Gil Scott-Heron, Natalie Cole, Angela Bofil, Phil Perry, Marion Meadows, Mica Paris, Abdullah Ibrahim, Ernest Ranglin, Denys Baptiste, Matthew Herbert, Julian Joseph, Courtney Pine, Gary Crosby, and the Jazz Jamaica All Stars amongst others.

Currently releasing under his middle names  ‘Imroel-Quays’, his debut album Reclamation released under Darwish in 2018 was well received with a 4 star review and album of the week in the Evening Standard as well as a 4 star review from Jazz wise. He was selected as featured artist by Jamie Cullum for his BBC Radio 2 show and headlined a BBC Introducing showcase hosted by Jo Whiley and curated by Cullum live on Radio 2 at the Cheltenham Jazz Festival.

Having studied the Sitar and Indian Classical music for some time his current project is a series of songs written around traditional Indian ragas due for release in 2022.