Beyond The Infinite Two Minutes | Triskel Arts Centre
We are committed to the Health & Safety of our staff and audiences. And we are operating under the agreed protocols described under "Guidance documents for the Safe Operations of Cinemas during COVID-19 Resilience and Recovery 2020-2021", a copy of which can be found here.
Live Music
Cinema
Visual Art
Festivals
Education
Special Events

Beyond The Infinite Two Minutes NC 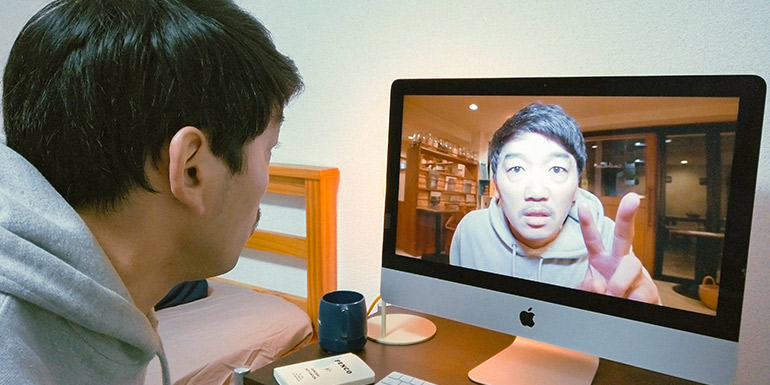 Kato lives above a cafe, which he also owns. One evening, while relaxing in his apartment after finishing work, Kato hears a voice calling him, a voice which seems to be coming from his own computer screen. In fact the voice is Kato’s own, reaching out to him from two minutes in the future! Somehow the screen in Kato’s apartment and the TV screen in the cafe downstairs are connected with a two minute time delay. Not knowing what to do, a confused Kato calls on his friends to help figure out this strange time-travel phenomenon. But will they be able to help him, or will they get distracted finding ways to take advantage of seeing into the future!

Shot entirely with an iPhone in just a handful of locations, Beyond the Infinite Two Minutes is the first feature film produced and starring Kyoto-based theatre troupe Europe Kikaku. Like much of the troupe’s theatre work, the film takes a relatively simple concept and adds layers of complexity, resulting in a story that seamlessly mixes inventive comedy and sci-fi together. Already being compared to One Cut of The Dead for similarities in originality, budget and ambition, Beyond the Infinite Two Minutes is an entertaining, charming one-of-a-kind. It’s sure to become this year’s cult gem.

Part of the Japanese Film Festival 2021