Aoife Burke | Triskel Arts Centre
We are committed to the Health & Safety of our staff and audiences. And we are operating under the agreed protocols described under "Guidance documents for the Safe Operations of Cinemas during COVID-19 Resilience and Recovery 2020-2021", a copy of which can be found here.
Live Music
Cinema
Visual Art
Festivals
Education
Special Events 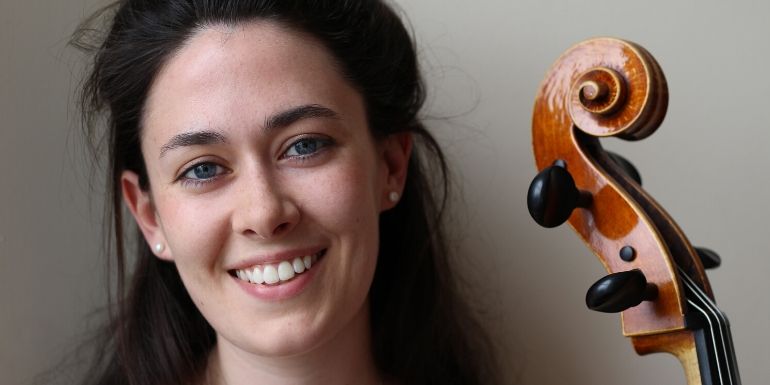 Aoife Burke is the second musician in our At Home with Triskel online concert series and will perform on Facebook at 1pm on Friday 3 April. This recital is free to watch but if you would like to make a donation, you can do so here.

A native of Cork, Aoife studied at undergraduate level with Emma Ferrand at the Royal Northern College of Music in Manchester, graduating in 2014 with a first-class honours Bachelor of Music degree and an LRSM Diploma in Performance with Distinction. For her third year, she undertook an Erasmus study exchange to the Folkwang University of the Arts in Essen, Germany, where she joined the cello class of Christoph Richter and the chamber music class of Andreas Reiner (Rosamunde Quartet). During the course of her studies, Aoife won the Raphael Sommer Music Scholarship and was a Britten-Pears Young Artist. She has participated in masterclasses with such renowned cellists as Raphael Wallfisch, Ralph Kirshbaum, Miklós Perényi and Frans Helmerson. Aoife holds a first class Master’s Degree in Arts from the CIT Cork School of Music, where she studied under Christopher Marwood.

An avid chamber musician, Aoife has collaborated with The Vanbrugh, the ConTempo String Quartet, Musici Ireland and the Gavin Bryars, Kirkos and Ficino Ensembles, and has performed at numerous national and international music festivals, including the NCH Chamber Music Gathering, the NCH Perspectives Series, West Cork Chamber Music Festival (where she recorded for RTÉ Lyric FM), Music in Drumcliffe, New Music Dublin, the RNCM Chamber Music Festival, Cantiere Internazionale d’Arte di Montepulciano, the Aurora Chamber Music Festival (Sweden) and Barry Douglas’ Clandeboye Festival, where she was awarded the Special Festival Prize. Aoife has appeared in recital as part of the Crawford Art Gallery’s Summer Lunchtime Concert Series, Music for Wexford Series, Castletown House Concert Series and the Triskel Arts Centre’s Summer Lunchtime Concert Series, among others. In 2018, she undertook a Chamber Studio mentorship with the Shandon String Trio under Richard Lester at King’s Place, London. Upcoming projects include a national tour with the Banbha String Quartet, supported by the National String Quartet Foundation, and a series of concerts with the Opalio Piano Trio in Ireland, Italy and Switzerland.

As an orchestral player, Aoife has toured Europe, China and the United Arab Emirates extensively with such orchestras as the European Union Youth Orchestra, the Royal Liverpool Philharmonic Orchestra, the BBC National Orchestra of Wales, Sinfonia Cymru, the RTÉ Orchestras, Camerata Ireland and the Irish Chamber Orchestra, performing at the BBC Proms, and Würzburg Mozart, Naantali, Aldeburgh and Cheltenham Festivals. She has appeared as soloist with orchestra several times both at home and abroad, most notably with the New York Concerti Sinfonietta in Carnegie Hall’s Weill Recital Hall in 2016, generously supported by Culture Ireland. As a session musician, Aoife has collaborated with Van Morrison, Ed Sheeran and The Cranberries, among others. She is grateful for the generous support of the EMI Music Sound Foundation, The Arts Council and Music Network’s Music Capital Scheme, funded by The Department of Culture, Heritage and the Gaeltacht. Music Network is funded by The Arts Council.

In these strange and surreal times, one thing we’re missing at Triskel is all the gorgeous music. So we decided to ask some of our favourite musicians to play for us from their homes. We will host At Home with Triskel recitals on Facebook Live, starting on Friday 27 March at 1pm and featuring pianist Fionnuala Moynihan. Fionnuala has performed at Triskel on a number of occasions and we always love hearing her play.Stay tuned for more announcements on who else will perform in this special series.